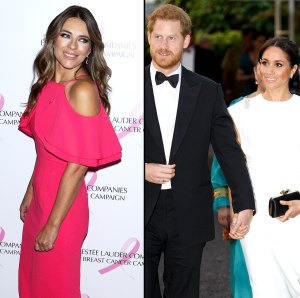 Elizabeth Hurley may have played the Queen of England on TV, but her connection to the royal family is more than what was on screen.

The 54-year-old, who starred on E!’s The Royals, told Us Weekly exclusively that she met Duchess Meghan when they were working actresses before the Suits alum started dating Prince Harry.

“I met her once when we were both just actresses. I think before she probably met her future husband. She was fantastic,” said Hurley, who illuminated New York City’s Empire State Building with pink lights and a pink ribbon on its mast on Tuesday, October 1, as part of Estée Lauder Companies’ Breast Cancer Campaign.

Though the Austin Powers: International Man of Mystery star hasn’t spoken to the former Tig writer in years, she noted that she’s a huge fan of the Duchess of Sussex’s royal work.

As for her other famous friendships, Hurley also told Us about her current relationship with her ex Hugh Grant, who she dated from 1987 to 2000. The Four Weddings and a Funeral star, 59, married producer Anna Elisabet Eberstein in 2018. The couple share 7-year-old son John. The Notting Hill actor also has son Felix, 6, and daughter, Tabitha, with ex Tinlan Hong.

“He’s one of my best friends. He’s a great dad,” Hurley said of Grant. “He does have five kids now. He’s happily married. And everything’s good. His career’s great. Family life’s great. He’s a lucky man.”

When asked about her current relationship status, the Bedazzled star remained mum.

“I won’t tell you if I were [dating someone],” she said. “I’m trying very hard to keep my private life a little more private than it perhaps has been in the past.”

The Gossip Girl alum starred as Queen Helena Henstridge on The Royals, which ran for four seasons on E! from 2015 to 2018. She shares son Damien, 17, with ex Steve Bing.