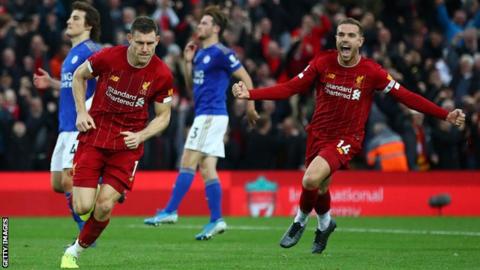 Brendan Rodgers’ side looked to be on course for a hard-earned point on his return to Anfield after James Maddison’s low finish 10 minutes from time equalized Sadio Mane’s 40th-minute strike.

And then, with the clock ticking into stoppage time, a communication breakdown between Leicester keeper Kasper Schmeichel and substitute Marc Albrighton ended with the latter bringing down Mane.

The penalty was awarded after consultation with the video assistant referee (VAR) and Liverpool manager Jurgen Klopp celebrated wildly as Rodgers turned away in despair.

Leicester will feel they had done enough to earn a point and their frustrations boiled over at the final whistle, with substitute Ayoze Perez involved in angry exchanges with several Liverpool players – who were celebrating increasing their lead over Manchester City at the top of the table to eight points.

A city can reduce the gap to five once more when they host Wolves on Sunday (14:00 BST).

This is the closest Liverpool have come to dropping points in the Premier League this season – but once again late Anfield drama provided a twist in the tale.

Leicester looked to have seen out the worst to claim a point. However, it was no surprise Mane was involved in the decisive incident the Foxes players contested so hotly.

Mane was not just his usual attacking threat – scoring his 50th top-flight goal for the Reds after racing on to Milner’s pass and expertly beating Schmeichel in the first half – he also worked tirelessly in his defensive duties to subdue the threat of Leicester full-back Ben Chilwell in the first half.

Senegal forward now has world-class status and came to Liverpool’s aid once more when it looked like the visitors would repeat their feat of last season and leave Anfield with a draw.

Liverpool is now on a run of 17 Premier League victories, bettered only by Manchester City’s sequence of 18 wins between August and December 2017.

They are also unbeaten in 44 league games at home – 34 wins and 10 draws – which is the longest current run in Europe’s top five leagues (England, France, Germany, Italy, and Spain).

The hosts were not at their fluent best but, like at Sheffield United last time out, they got a break when needed and cashed in.

Leicester City arrived at Anfield with many tipping them as serious top-four contenders given the crisis at Tottenham and the transitions taking place at Chelsea and Manchester United.

Nothing on view here suggested this is a false claim. This is a very impressive side superbly organized by Rodgers.

Rodgers may feel they took too long to crank up the attacking threat on Saturday – but the manner in which they remained calm, composed and frustrated Liverpool’s world-class attack for long periods bodes well for the season ahead.

Jamie Vardy only had one chance in behind the Reds defense but his touch let him down, while Maddison was relatively quiet until he stole in on the end of Perez’s pass to shoot under Adrian, although Liverpool’s keeper surely should have done better.

It was the overall look of Leicester that suggested they will be a top-four force this season – a good blend of youth and experience, pace and resilience.

It says a lot about them that they will leave so Anfield so bitterly disappointed. They were not in awe of a team that has carried all before them in the Premier League this season.

‘We knew it would happen’ – what they said

Liverpool manager Jurgen Klopp speaking to BBC’s Match of the Day: “It was a super game. We upped the tempo. The football we played was so important. Leicester’s goal really stopped us but then we wanted to go forwards.

“The penalty was obviously a penalty. We knew it would probably happen, we knew we were going to fight for the win – and we did. Without luck, we cannot win the amount of games we have won, but over the 90 minutes we deserved it – we deserved the three points. Milner held his nerve and that was superb.

On the late challenge on Mohamed Salah by Hamza Choudhury: “How can Mo be OK? How did he only get a yellow card? Mo limped off the pitch. That’s hard. It was done to slow Mo down and that is not OK.”

Leicester manager Brendan Rodgers on Sky Sports: “I thought we deserved more than that. It’s cruel to concede so late. I am very proud of the team. We’re playing against the European champions and we looked like we could get goals. We were always a threat in the game, we had the confidence to pass the ball. We are showing our personality in how we played.

“We are bitterly disappointed to concede the penalty and it did not look clear and obvious to me. I think Mane made the most of the contact. I don’t think if it had not been given by the referee it would have been overturned by VAR. When the referee gives decisions it is hard for them to overrule it.”

Leaving it late – the best of the stats

It is now an international break meaning Liverpool are not back in action until Sunday, 20 October when they travel to Old Trafford to take on rivals Manchester United in the Premier League (16:30 BST). Leicester play a day earlier at the King Power against Burnley (15:00).

Shots on Target
Home8
Away1

Penalty conceded by Marc Albrighton (Leicester City) after a foul in the penalty area.

Trent Alexander-Arnold (Liverpool) wins a free kick in the defensive half.

Hamza Choudhury (Leicester City) is shown the yellow card for a bad foul.

Virgil van Dijk (Liverpool) wins a free kick in the defensive half.

Attempt missed. Virgil van Dijk (Liverpool) header from the centre of the box is just a bit too high. Assisted by Andrew Robertson with a cross following a corner.

Attempt missed. Dejan Lovren (Liverpool) header from the centre of the box misses to the left. Assisted by Trent Alexander-Arnold with a cross following a corner.

Sadio Mané (Liverpool) wins a free kick in the defensive half.

Attempt blocked. Roberto Firmino (Liverpool) right footed shot from the right side of the box is blocked. Assisted by Mohamed Salah.

Attempt missed. Dennis Praet (Leicester City) right footed shot from outside the box is close, but misses to the left.

Jonny Evans (Leicester City) is shown the yellow card for a bad foul.

Attempt saved. Andrew Robertson (Liverpool) left footed shot from the left side of the box is saved in the top centre of the goal. Assisted by Mohamed Salah.

Attempt missed. Roberto Firmino (Liverpool) right footed shot from the centre of the box is close, but misses to the left. Assisted by Trent Alexander-Arnold.

Ben Chilwell (Leicester City) wins a free kick in the defensive half.

Georginio Wijnaldum (Liverpool) wins a free kick in the defensive half.