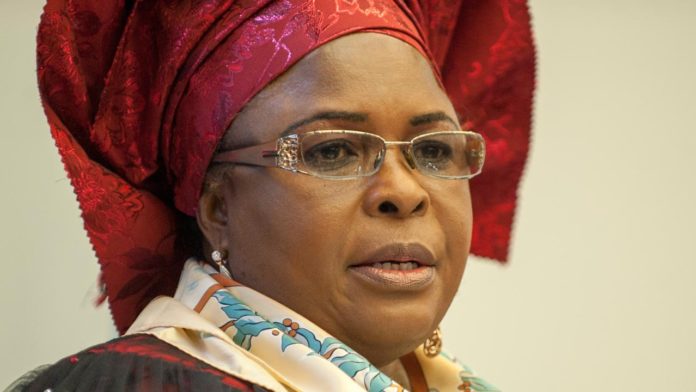 The Economic and Financial Crimes Commission, EFCC, on Monday, January 15, 2016, filed an ex-parte application seeking an order of interim forfeiture of various sums of money linked to the wife of former President Goodluck Jonathan in 15 bank accounts.
The ex parte application is supported by a 15-paragraph affidavit deposed to by Huleji Tukura, an investigator with the EFCC.

The application was brought pursuant to Section 17 of the Advance Fee Fraud and Other Fraud Related Offences Act no. 14, 2006 and Section 44 (2) b of the 1999 Constitution.
The former First Lady is joined in the suit alongside Globus Integrated Services Limited, Finchley Top Homes Limited and Am-Pm Global Network Limited.

Others respondents are: Pagmat Oil And Gas Limited, Magel Resort Limited And Esther Oba.
Moving the application before Justice Mojisola Olatoregun of the Federal High Court, Ikoyi, Lagos, Rotimi Oyedepo, counsel to the EFCC, prayed for an order of the court to forfeit to the Federal Government the total sum of $3,645,013.73 (Three Million, Six Hundred and Forty Five Thousand, Thirteen United States Dollar, Seventy-three Cent) found by the Commission in account No.2031277178 domiciled with First Bank of Nigeria Plc in the name of the first respondent, which sum is reasonably suspected to be proceeds of unlawful activity.

Oyedepo, among others, also prayed for an order of the court forfeiting to the Federal Government the total sum of $4,361,393.24(Four Million, Three Hundred and Sixty One Thousand, Three Hundred and Ninety Three United States Dollar, Twenty Four Cent) found by the Commission in account No.1771421299 domiciled with Skye Bank Plc in the name of the second respondent, which sum is reasonably suspected to be proceeds of unlawful activity.

However, Oyedepo, while moving the application, was interrupted by counsels to Jonathan led by Ifedayo Adedipe, SAN and Mike Ezekhome, SAN.

Jonathan’s lawyers challenged the court’s jurisdiction to entertain the ex parteapplication.
They further argued that the funds, which the Commission is seeking to seize, were subject of litigation, adding that “the suit is before some other courts.”

In his response, Oyedepo kicked, arguing that Jonathan’s lawyers had no right of hearing.
Oyedepo also expressed shock over the presence of the defence counsel in court today, saying “It is an ex parte application.”

After listening to both parties, Justice Olatoregun adjourned till January 23, 2018 and directed the EFCC to file an affidavit to establish its claim that there are no pending law suits relating to the funds before other courts.