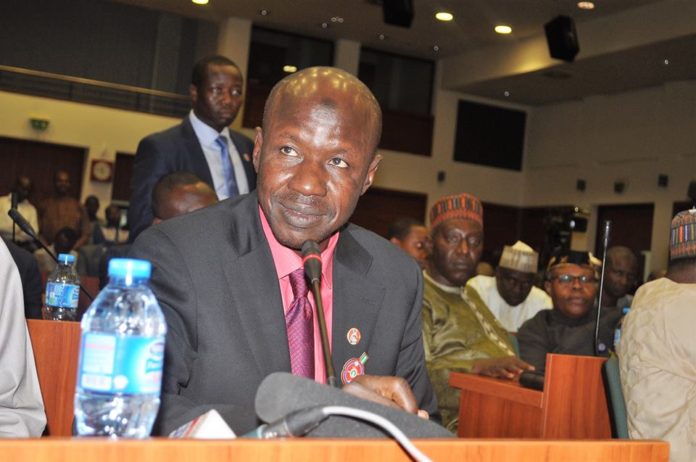 The Economic and Financial Crimes Commission, EFCC, has denied the allegation that officials of the anti-graft body shared 222 properties which the former Chairman of the Presidential Pension Reform Task Team, Abdulrasheed Maina’s panel seized from pension fund thieves.

Ibrahim Magu, Acting Chairman, EFCC, made the clarification today, November 30, when he appeared before a Committee of the House of Representatives investigating the sack and reinstatement of Maina into the civil service after he was declared wanted by the EFCC for pension fraud.

“All the pension fraud assets that are in the recovered assets inventory of the Commission were products of independent investigation by the EFCC, for which Maina and his cohorts had no clues”, Magu said.

He added that a record of all the recovered assets from both the police pension and the pension office of the Head of the Civil Service of the Federation remained intact. The EFCC boss said that there was no record of any collaboration between the agency and the Maina–led Pension Reform Task Team, PRTT, in the investigation of pension fraud.

“The only link between the EFCC and Maina was the participation of a few staff of the Commission in biometric verification exercise by the Maina Task Team. The leader of the EFCC team at the time was Colonel I. D. Sule (rtd), a contract staff who was Head of the Commission’s Servicom Unit. The verification exercise was not a criminal investigation and no asset was recovered in the process”’ he said

Magu challenged Maina if he had any evidence to the contrary, to disclose the number and types of assets that he handed over to the EFCC; disclose from whom the assets were recovered; disclose the date, time and venue where the handing over took place and name the official that received the assets from him. He added that the suspects investigated in the Police Pension fraud from whom assets were seized, include: Atiku Kigo, Esai Dangabar, Ahmed Inuwa Wada, Veronica Oyegbula, Uzuoma Cyril Attang, Sani Habila Zira, John Yusuf and their associated companies and persons.

In the pension office of the Office of the Head of the Civil Service of the Federation, the EFCC boss named Shaibu Teidi, Phina Chidi, Abdul Mohammed, Emmanuel Olanipekun, Aliyu Bello and their associated companies as persons from whom assets were recovered. According to him, the assets seized from these suspects are in two categories. They are assets that are under interim forfeiture which means that they are temporarily seized pending the determination of the substantive cases in court, a category which most of the assets recovered from pension fraud suspects belong. And, assets on which the court had given final forfeiture order.

Magu told the panel that Maina was under investigation by the EFCC for fraud and money laundering, describing him as the arrow head of complex web of illicit deals that saw hundreds of millions of pension funds allegedly ending up in his private pockets.

He said that Maina operated the accounts of Cluster Logistics Limited, Kangolo Dynamic Cleaning Limited and Drew Investment and Construction Company Limited, Nafisa Aliyu and Abdulahi Faizal.
His words: “It is important to note that, the 6 accounts operated solely by Maina had a total inflow of over N2.7billion between 2008 and 2013, with 95 percent of the deposits being in cash. It was discovered that Faizal Abdullahi’s Account (his son), had a turnover of over N1.5billion in less than a year. It should also be noted that Maina operated these accounts through telephone and email messages. Most of the funds were converted to forex through Bureau De Change and delivered to Maina in cash. Part of the funds was used to purchase properties, including the house at No. 10 Hamisu Musa Road, Jabi which he bought for $2 million in cash”.

According to him, Maina was declared wanted by the Commission after he had failed to respond to invitations by EFCC, an action that led to him being put on the Interpol Red Notice.
“Presently, there is a subsisting warrant of arrest against Maina”, Magu added.