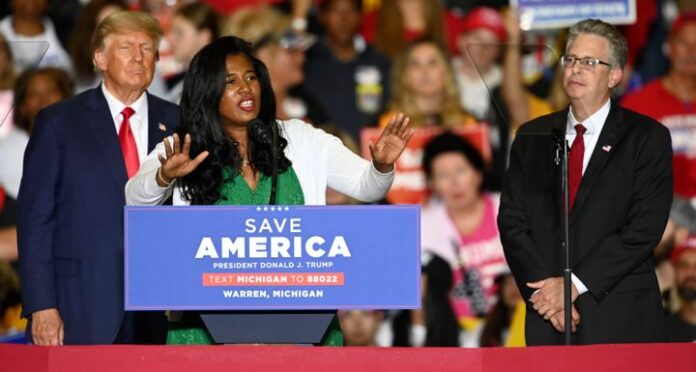 LANSING, Mich. (AP) — The Republicans who lost their races for Michigan’s top three statewide offices after promoting falsehoods about the 2020 presidential election are not planning to go quietly.

Two of the candidates who denied President Joe Biden’s victory in the state have announced plans to run for the position that leads the state GOP, while the third has said she is considering a challenge for the top post.

That is raising concerns within the party after it suffered a drubbing in Michigan, a perennial political battleground that is poised to play a pivotal role in the 2024 presidential race. Their attempts to gain control of the party apparatus also show how far-right conservatives are trying to maintain their grip on the party’s grassroots at a time the GOP nationally is wrestling with its direction after lackluster midterm results.

Kristina Karamo, a community college professor who lost her race for secretary of state after mounting a campaign filled with election conspiracies, used the same kind of charged language she had throughout her campaign in announcing her intention to run for Michigan party chair.

In a statement posted this week to social media, she said the state Republican Party had begun operating as “mini-gangs instead of soldiers fighting for freedom,” and that the state was on “the precipice of tyranny, which voting alone will not be able to overcome.”

Instead of being afraid of attacks, she wrote, “we must strike fear in the heart of the enemy at the gate.

The race for Michigan GOP chair, which will be decided at a February party convention, comes after Democrats took control of all levels of power for the first time since the 1980s. Democrats won control of both houses of the Legislature and defeated Republicans by significant margins for governor, attorney general, and secretary of state.

Many state and national Republicans have expressed concern that similar defeats could become commonplace without a course correction within the state Republican Party.

“It’s hard to think of a state where Republicans lost more than in Michigan,” said Stu Sandler, a national Republican consultant. The state party wasn’t the traditional partner it had been in the past, he said, in part due to a chair he described as not very active.

“The chair could be very important, particularly, because they have no statewide elected official or prominent Republican as a voice, and that’s something that chair could be under the right circumstances,” Sandler said.

In addition to Karamo, attorney general candidate Matthew DePerno has announced he will seek the position. Republican Tudor Dixon, who lost the governor’s race by 11 percentage points to Democratic Gov. Gretchen Whitmer, said she also is considering running.

All three candidates were endorsed by former President Donald Trump and echoed his false claims of a stolen election — although Dixon pivoted away from her earlier statements after she won the Republican primary for governor.

“This race is unique because it’s the fruition of a very long battle between grassroots elements and the so-called establishment,” said John Sellek, a Republican consultant in Michigan. “For the first time, this race is a choice between multiple MAGA candidates, meaning the grassroots may have finally taken over.”

A state party memo written days after the Nov. 8 election, and shared on social media by Dixon, blamed the grassroots takeover for the Republicans’ midterm losses. Michigan GOP chief of staff Paul Cordes wrote that the party struggled due to a lack of “high quality, substantive candidates and well-funded campaigns.”

“Over the course of this cycle, the Michigan Republican Party operated within the political reality that President Trump was popular amongst our grassroots and a motivating factor for his supporters, but provided challenges on a statewide ballot, especially with independents and women in the midterm election,” Cordes wrote.

The memo also pointed to an abortion rights ballot proposal, which passed overwhelmingly, as one reason for the Democrats’ sweep. Candidates in the state also ran in new districts drawn by an independent citizens commission that had been created previously by votes, instead of the heavily gerrymandered districts that had been drawn by Republican lawmakers.

Dixon said in response that the memo was a “perfect example of what is wrong” with the party and that there is “an issue of leadership.”

Current chair Ron Weiser has said he will not seek reelection, while co-chair Meshawn Maddock has not announced whether she will run. Michigan Republican Party spokesperson Gustavo Portela said the party would have no further comment about the chair competition.

Similar to party conventions last spring, where delegates nominated DePerno and Karamo, the chair position will be chosen by county precinct delegates during the Feb. 18 convention. Jamie Roe, a GOP consultant and county delegate, expects the delegates attending the convention to once again be grassroots activists that favor Trump-backed candidates.

“There is no way on God’s earth that the donors of the state would entrust a DePerno or Karamo with the resources needed to regain power,” said Roe. “There will have to be something done outside the traditional structure.”

With over two months remaining before the convention, some in the party still hope a candidate will emerge that can unite both the grassroots and establishment sides of the party.

Also read: Why Christmas Trees Are Scarce And More Expensive This Year

Former U.S. Rep. Pete Hoekstra, who served as an ambassador to the Netherlands from 2018 to 2021, said during a recent interview that he’s considering running. State Sen. Tom Barrett, who lost the 7th Congressional District race to Democrat Elissa Slotkin, also has been pushed by Republicans to seek the position, according to spokesman Jason Roe.

DePerno said he believes he can unite both sides of the party. In an interview Friday, he said the party needs to be rebuilt to “bring together the grassroots activists with the legacy donor class.”

“The legacy donors, although they didn’t want to publicly support candidates that they thought were associated with Donald Trump, they did support me at least through third-party PACs,” DePerno said.

The former tax lawyer rose to prominence in the party by pushing Trump’s lies of a stolen election in the state following the 2020 presidential election. A special prosecutor is currently reviewing whether to criminally charge DePerno and others for attempting to gain access to voting machines after that election.
Also read: 2023: Atiku, Myself Confident Of Victory – Senator Olujimi

Lavora Barnes, chair of the Michigan Democratic Party, said the “biggest gift the Republicans can continue to give us” is infighting within the state party and nominating candidates who are “crazy and right of crazy.”

“Looking at this group of folks who are interested in running for chair, I think we might see a little bit of the same in terms of the kind of candidates that these folks would support,” Barnes said. “And I think that will help us hold the legislature going forward.”