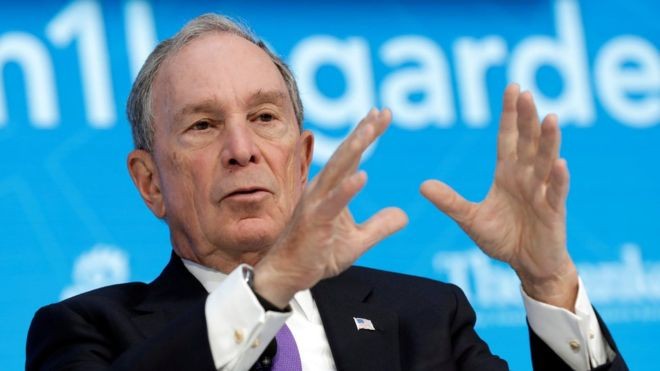 Former New York Mayor Michael Bloomberg says he will pay $4.5m (£3.2m) to cover the lapsed US financial commitment to the Paris climate accord.

He said he had a responsibility to help improve the environment because of President Donald Trump’s decision to pull out of the deal.

The withdrawal was announced last June and sparked international condemnation.

It will make the US in effect the only country not to be part of the Paris accord.

The Paris agreement commits the US and 187 other countries to keeping rising global temperatures “well below” 2C above pre-industrial levels.

“America made a commitment and, as an American, if the government’s not going to do it then we all have a responsibility,” Mr Bloomberg said on CBS.

“I’m able to do it. So, yes, I’m going to send them a cheque for the monies that America had promised to the organisation as though they got it from the federal government.”

It said the money would go to the United Nations Framework Convention on Climate Change (UNFCCC).

In January, President Trump said the US could “conceivably” return to the deal if it treated America more fairly.

Mr Bloomberg said he hoped that by next year Mr Trump will have reconsidered his position on the deal.

“He’s been known to change his mind, that is true,” he said. “America is a big part of the solution and we should go in and help the world stop a potential disaster.”

What is in the Paris climate agreement?

The deal unites all the world’s nations in a single agreement on tackling climate change for the first time in history.

Coming to a consensus among nearly 200 countries on the need to cut greenhouse gas emissions is regarded by many observers as an achievement in itself and has been hailed as “historic”.

As well as the limit on global temperatures, it includes a limit on the amount of greenhouse gases emitted by human activity and a requirement for rich countries to help poorer nations by providing “climate finance”.