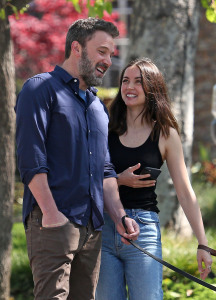 Ben Affleck and Ana de Armas’ Whirlwind Romance: A Timeline of Their Relationship

In photos posted by TMZ, the Oscar winner, 47, and de Armas, 32, were accompanied by his three children — Violet, 14, Seraphina, 11, and Samuel, 8 — as they walked the Cuban actress’s dog, Elvis, along with Garner’s dog, Birdie, and Affleck’s German shepherd in Brentwood, California. All five wore masks as they stepped out amid the coronavirus pandemic.

Ben Affleck and Ana de Armas take their dogs for a walk in Los Angeles on April 1, 2020. Broadimage

The outing came days after an insider told Us Weekly exclusively that Affleck and Garner, who split in June 2005 after 10 years of marriage, “have worked hard to get in a good place with each other.”

The source added that the Camping alum, 48, is “always polite and trusts Ben and lets him do what he wants when he’s with the kids.”

Us exclusively revealed in October 2018 that Garner had moved on with businessman John Miller, and the insider told Us earlier this week that while it is bittersweet to see her husband “move on and be so happy,” the Alias alum “is ultimately happy that he is happy and in a good and healthy place with his life. That’s what she ultimately wants for the father of her kids.”

“They are having so much fun together and she has been telling friends how Ben is the most amazing boyfriend she’s ever had,” a source told Us earlier this month.

Meanwhile, another insider told that de Armas admires how Affleck and Garner work together to co-parent their children.

“She thinks Ben is such a sweet and nice guy,” the source told Us, adding that de Armas is impressed by “how he juggles so much between work, his kids and co-parenting with Jen.”

According to the source, the Argo star “splits his time” between his girlfriend and his son and daughters, who are “the most important thing in his life,” but he “always makes sure he has time for [Ana].