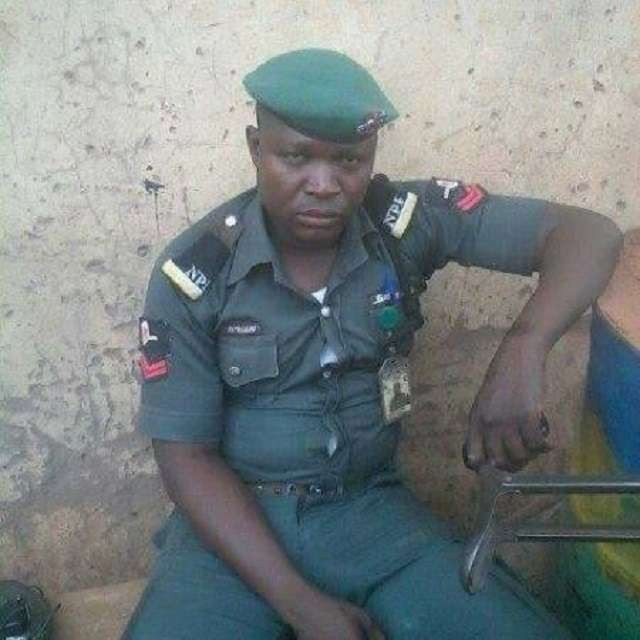 A concerned human rights activist and journalist, Comrade Alhassan Haruna Dambatta,has called on the Inspector General of Police to bring to book a police officer attached to the Anambra State Police Command for allegedly abducting a 14-year-old girl whom he turned into his sex slave.

Comrade Dambatta narrated how the rogue officer identified as Corporal Barau Garba, had abducted the girl who was sent on an errand by her father in the guise of helping her, only to keep her captive and repeatedly raped her till he ruptured her private parts.

In a post the journalist put up on his Facebook wall, the girl who is from the Northern part of the country, lives with her parents in Asaba, Delta State, was sent by her father to nearby Onitsha in Anambra State to buy something but on her way, she lost the money in a vehicle.

As she was crying on the road trying to see if she could see the vehicle, Cpl. Garba came on the scene and being a Hausa person, convinced the girl to go with him on his motorcycle so he could take her home and pleaded with her father to forgive her.

Instead of playing the good Samaritan to the end, Cpl. Garba was said to have taken the girl to a location where he kept her for six days and repeatedly raped her till her vagina erupted.

It was only after the girl managed to use Cpl. Garba’s phone to call her father that respite came her way but by then, the damage had been done but the twist in the case is that the Anambra Police Command has been foot-dragging on the case and even wants the father of the girl to let go of the case as they are both from the North.

“Abducted and raped for six days by a rogue Nigerian Policeman’

Maryam Yusuf is just 14-years-old, an indigene of Kano State, living with her parents in Asaba, Delta State. She does attend Islamic School in Cable area known as Hausa quarters in Asaba.

Maryam was sent by her father to Onitsha from Asaba on the 14th of October, 2017, to buy round cotton but unluckily for her, she lost the money while in transit.

During her efforts to identify the vehicle she boarded while standing by the roadside, she was approached by one Corporal Barau Garba [Mopol] with service number 275601 from MOPOL 7, Sokoto State, but on a special duty in Anambra State.

His team is attached to the Okpoko Police Divisional Headquarters in Onitsha. The rouge police corporal approached the teenage girl asking her what happened.

As the small girl explained to him how she lost her money in transit and her need to go back home, the policeman Barau Garba deceived her by asking her to join him on his motorcycle so that he could take her back home.

Instead of taking the teenage girl back home to her parents safely, this Nigerian police corporal decided to abduct her and took her to a temporary police base and locked her up in his room and maliciously raped her for six good days.

This policeman raped this teenage girl until her private ruptured. For those six agonizing days, innocent Maryam was begging him to take her home but he refused. His Waterloo reached its peak when on the 6th day, in the middle of the night, Maryam took his mobile phone and called her father to come to her rescue.

Maryam was taken to the Federal Medical Center in Asaba on the 25th of October, 2017, by a good Samaritan because the police in accord with the DPO of Okpoko Division are not forthcoming with her case.

They want to cover up the case, especially as they told the father that the issue has to be forgiven since they are all of the northern origin.

One of the medical results showing the girl was raped (Facebook)

Attached here is the hospital card where innocent Maryam was taken to and the various tests were conducted; it was ascertained she was raped beyond human imagination and left with a ruptured vagina.

The IGP has to use a holistic approach to root out these bad eggs amongst the Nigerian police force.

Justice must be done here.

In Yola Police arrest 200 cows for invasion of farm He also commended the herdsmen for accepting responsibility for the destruction by their cattle and their commitment to pay for the damages.