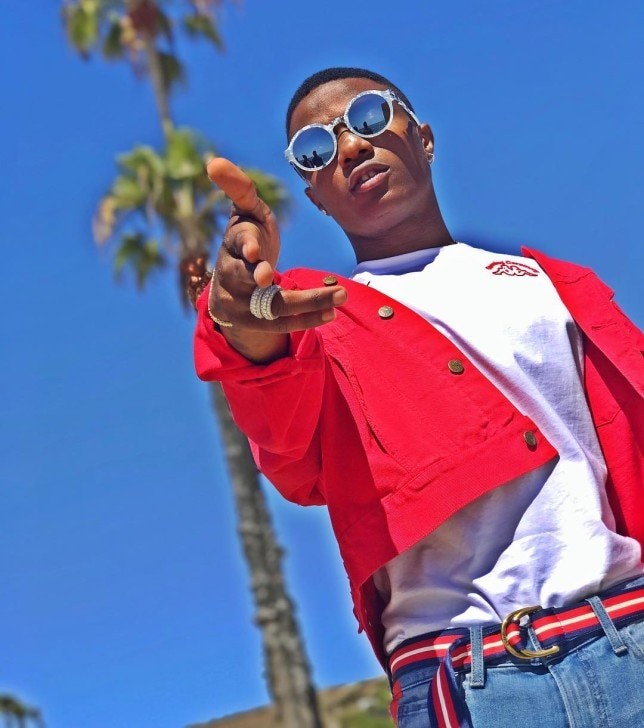 Wizkid couldn’t stand a man hitting a lady at his concert as he stops the concert mid-way to warn the unruly man.

Wizkid stopped his live performance at his concert in Uganda for a short period of time to call out a fan who hit a lady while the concert was on.

The music star who couldn’t hold back had to appeal to the guy never to hit a lady and at the end of his statement called for the lady in question to come up the stage.

The moment Wizkid stopped his performance last night in Uganda, to warn a fan never to hit a lady again in his life : Japson

The fans at the concert screamed in admiration when Wizkid call out the unruly guy.

Wizkid’s gentlemanly gesture is similar to what D’banj did at Phynofest in November. The singer stopped his performance to save a lady who was reportedly being molested in the crowd.

The visibly angry D’banj, was seen in the video asking the security team to bring the girl to him, describing the incident as barbaric.

D#emo#4oCZ##banj stops his performance at a concert in Enugu, to rescue a female fan being assaulted. : GOLD EDGE TV

Wizkid who has had a very good year, just recently made Africa proud at the just concluded MOBO awards where he took home the award for the “Best International Act” ahead of JAY-Z, Solange Knowles, Kendrick Lamar, DJ Khaled and others.

play Wizkid in a screenshot from his latest music video ‘Manya’.

After the news of the award broke, Wizkid received a lot of praises and congratulatory messages from a lot of people including the former president of Nigeria, President Goodluck Jonathan.

Grime Act Stormzy was the biggest winner of the night as he bagged three awards including an award for ‘Best Male Act’.

Just a few days ago while granting an interview with pressmen, Wizkid called out Award bodies who give out awards to Africans backstage, citing that’s the reason he doesn’t attend those shows.

The 5 best/worst Trump Thanksgiving tweets
Watch this runs-girl celebrating N100K pay off with nude video
Explicit video and photos female teacher sent to underage students before threatening to fail them if they don’t sleep with her
‘It’s better to be single than being in a relationship where you still feel very much alone’ – Omowunmi Akinnifesi advices Ladies
Man proposes to his girlfriend at The Experience gospel concert held at Tafewa Balewa Stadium
Lol…you guys play too much….
Davido, Wizkid And Other Winners At The 2017 MOBO Awards
Ha, whose mother/sister or aunty is angrily flaunting her breasts on social media?
Videos: Lady propses to her boyfreind of six years… and he said yes!
Touching video of 8-year-old girl who suffered a brain aneurysm responding to her mother’s voice in the hospital
Wizkid, Tekno New song ‘Mama’ isn’t the best collaboration that these stars can make
Police nab suspect operating with master key
WTF is wrong with people? Lady shares photo of herself with her friend taking a sh*t together
Man commits suicide in Delta after girlfriend dumped him
With a GPA of 4.97 Nigerian lady graduates as Bells University’s best student
See the shocking thing a woman did to her stepdaughter in Lagos
Ritual Murder Headless body of young girl found inside suitcase in Edo [Graphic Photos] The headless body of a young lady has been discovered stuffed inside a suitcase and dumped by the roadside in Edo State.
Face Of Evil How policeman abducted 14-yr-old girl, raped her for days… Ruptured private parts A police officer attached to the Anambra Police Command has been accused of abducting and raping a 14-year-old girl, rupturing her vagina in the process.
Shaydee – Make Sense ft. Wizkid