With September looming, parents across Canada call for pandemic-era safety measures and supports 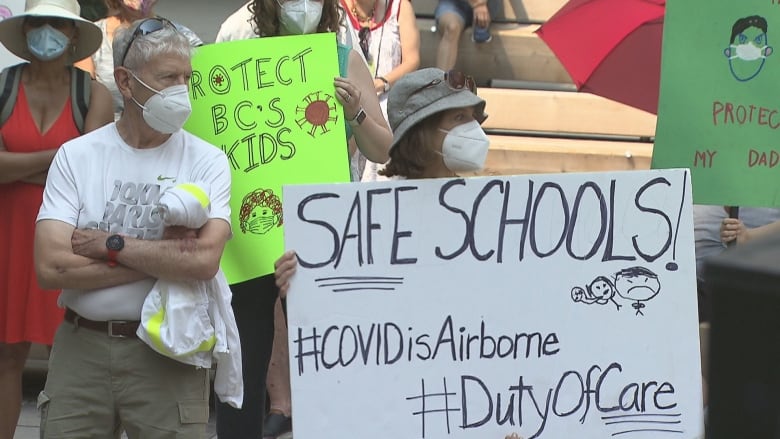 As kids and teachers get ready to head back to classes — many of them in person after a year of interruptions caused by COVID-19 — parents across the country are organizing to take action to ensure their kids and school staff stay safe.

In Winnipeg, parents are asking the government to require regular rapid testing for students and staff. In Vancouver, many parents rallied for a mask mandate in elementary and secondary schools. In Toronto, a mom is advocating support for kids and teachers struggling with online learning.

And in Newmarket, Ont., Shameela Shakeel is pushing for strong ventilation systems, smaller class sizes and vaccination mandates for school staff to protect kids under 12 who are too young to get the shots themselves.

“We are still pushing for the same things we were pushing for last year,” said Shakeel, a mother of four, who is the co-chair of parent-teacher coalition York Communities for Public Education. “Things that are hopefully going to make a difference is that all of these groups and all of these advocates are now together because the virtual space has made that possible.”

When the pandemic hit and families were scrambling for information about school closures, virtual learning and COVID-19-era education policies, Shakeel started receiving messages from other parents concerned about their school-aged kids.

“I was getting a lot of private messages and phone calls,” Shakeel told CBC News. “That’s when I decided to start a Facebook group … That’s really helped with connecting other parents and educators.”

The group that Shakeel created last summer, called Families and Educators for Safe Schools in York Region, now has over 4,100 members.

It’s one example of the efforts Canadian parents have been making during the past 17 months to organize and advocate for school safety and classroom supports — in person and online — during a pandemic that has wreaked havoc on public education systems.

Some have launched petitions or formed grassroots groups, while others are campaigning solo.

Kyenta Martins is a co-founder of the B.C.-based organizations Safe School Coalition and Option 4 Families of Vancouver — both formed in the last 12 months.

Martins, who opted to have her kids do school remotely last year because she is at risk of health complications, said she was would have never considered herself an education advocate before COVID-19 struck.

Now, she moderates online discussions, answers media requests, and tracks school district meetings — all before her kids have woken up and had breakfast.

“I work part-time, and right now, advocacy is another job for me,” she said. “And I would almost say it’s a full-time job.”

In July 2021, Statistics Canada released a report concluding that nearly 75 per cent of parents were “extremely concerned” about juggling work, child are and their kids’ schooling during the pandemic.

Adding advocacy on top of an already-exhaustive list of responsibilities has other parents feeling the way Martins does.

“It became a second job for me to advocate for my son,” said Emily Feairs of Toronto, whose son struggled with anxiety as a result of on-camera learning.

Working solo in her discussions with the school board trustee, superintendent, teachers and principal, Feairs said efforts to connect with other parents were challenging, without the usual opportunities for community gathering — drop-off, pick-up, after-school meetings — that parents usually use to catch up.

Krystal Payne is a founding member of the advocacy group Safe September MB which recently wrote two letters calling on the Manitoba provincial government and the Winnipeg School Division to provide “safe and accessible education for K-12 students in September 2021.” Payne says that some parents are getting worn out.

“I think we’re fighting against a tide of people being very tired,” she said. She noted that last year, one of the organization’s letters quickly accrued nearly 18,000 signatures. While that initial momentum has slowed, the group still has support from parents, daily interest in their social media page and is steadily collecting signatures on their new letters.

“This year, folks are just really tired, and they want to return to normal.”

Earlier this month, Martins created a Facebook page for the Safe School Coalition to connect with other parents asking for more stringent school safety policies from the province.

With only 24 hours notice, she said that hundreds of people tuned in for the organization’s live stream of their first event, a rally at the Vancouver Art Gallery. As of Wednesday, the stream had over 5,000 views.

But dealing with social media detractors can be a “thankless job,” said David Gray, co-founder of Wall of Alberta Moms and Dads, a now-defunct organization for parents who were concerned about the safety of children and staff in schools during the pandemic.

As parents and students prepare for back-to-school, Edmonton’s two school board chairs remain grateful for one thing: they have the power to make their own COVID-19 protocols. 0:57

“We sort of tore things up for a few weeks, you know, we got a lot of traction on social media,” Gray said. The organization attracted many volunteers, and they spent their days holding phone banks, conducting letter-writing campaigns and organizing email blasts, he said.

But, Gray added, “One of the more disheartening things for people was, you know, being told, ‘It’s great that you’re protesting this, but you’re doing it wrong,’ or, ‘We can’t agree with this one thing you said, so we can’t agree with anything you’ve said.'”

‘This has radicalized a lot of parents’

During times of crisis for the education system, there is a stronger push for change, said Annie Kidder, founder of the research group People for Education.

“There definitely is a tendency for activism to be on the rise in education when there’s a concrete crisis or a concrete issue about which people feel very strongly,” Kidder said, adding that it’s important for people to be engaged and actively involved with schools, even if they aren’t activists.

But with a variant-driven fourth wave of COVID-19 on the rise across the country and high vaccination rates prompting provinces to loosen safety restrictions in schools, the pandemic’s effect on schools has given parents little choice but to take serious action.

“I think this has radicalized a lot of parents, right?” Feairs said.