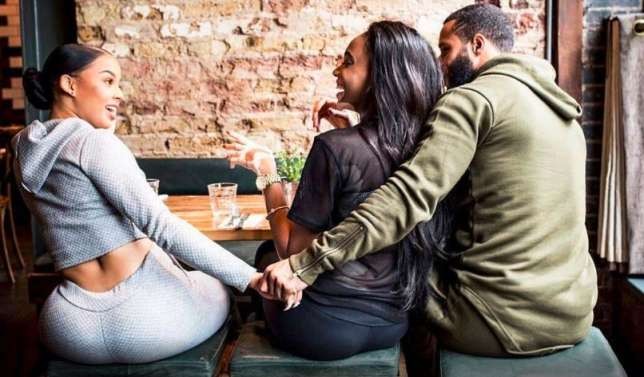 How exactly does a man break off his engagement with his partner, and maintain their relationship, only to get engaged to her colleague four months later?

If we know anything now, it’s that Twitter love threads can go either way. This time, a Twitter user has shared an interesting account involving two co-workers who, at separate points, were engaged to the same person.

The road to heaven is said to be thin and narrow, but the road to a man’s heart can be even more fickle.

Sometimes, in the course of exploring affection, one half of a relationship can lose their initial passion and douse the flames of passion with cold, almost freezing behaviour.

In other situations, the partner can decide to diversify interests. That is what happened in this case and as the story relates, it did not exactly end well.

Twitter User @Jenniieey shared in a long thread, how a fight broke out in her office between two friends who found they were on either side of a very nasty love triangle.

The fight broke out when one of the workers, found that her friend had gotten engaged to a man who was her ex-fiancee.

She and this ex-fiancee had broken off their engagement, so he could take some time to prepare well for marriage. What a plot twist.

If you’re here for the origins of the saga, you will have to go back a couple of months when one of the colleagues got engaged to the man at the centre of this saga.

A few months later, the two took a step back and broke off the engagement in October. The relationship continued, but the marriage was put on the back burner so the man could get ready for its demands.

The fact that the relationship continued meant that both parties were still entitled to certain bodily privileges and otherwise.

Our ex-fiancee fondly referred to as uncle in this scenario, continued to bring his partner lunch, but this time, like P-Square before they split, it was a two-in-one scenario.

The other pack of food was for one of her colleagues in their administrative department. As the story goes, this admin lady (another moniker that we have to use for lack of a better option) was the couple’s mutual friend.

Uncle made reference to this when his girl asked why he was bringing lunch for a duo, instead of the proverbial apple in his eye.

As it turns out, the apple had been exchanged for another fruit, a very familiar fruit in fact.

According to @Jenniieey, the man and his girl’s colleague had been in a relationship since February, four months before he broke off his engagement.

Fast forward to the present and over the weekend, our friend at admin announced her engagement.

Her friend, ever the loving companion (because how are you not co-wives already if your boyfriend is bringing food for two women), ran to share in her joy.

The one thing that grabbed her attention from the get-go was that the ring looked awfully similar to the one she had gotten from her ex-fiancee.

Plotter twist: An exchange of destinies

When her suspicions got the better of her, the woman scorned proceeded to steal a glimpse of the lucky man who has gotten engaged to her friend.

The recently-engaged admin lady was the cynosure of all eyes and in between all the congratulatory messages, she failed to notice that her phone had found its way into the hands of someone who was, according to @Jenniieey, familiar password.

A gallery opened, a few photos scrolled past, Lo and behold, it was the same previously-lucky man who had gotten engaged to her a few months before.

Whoever used the term “all hell was let loose” must have witnessed a scuffle of passion and if this Twitter user’s description is anything to go by, hell really did descend on the office where both ladies worked.

The lady scorned in this scenario is said to have gone in for one of those frontal dives that you can only get from the WWE. A fight ensued, one that was so heavy that both women were asked to leave the building.

According to the Twitter thread, both ladies were given letters of suspension.

It is hard to put a good word in for the man in this scenario. Time and time again, we have to be reminded that women’s emotions are never to be treated with such recklessness, especially when it comes to a matter as delicate and fundamental as marriage.

In this day and age, it is sad that a man would be so conniving as to hatch such an elaborate plan to ditch his fiancee and sell her false hopes while making plans to get hitched to her friend and colleague within the space of months.

The alternative was much easier; telling both women how he felt and making a clear and well-communicated choice.

All things being equal, he should be tied and thrown to the good people abt #MenAreScum Twitter for review.

On the other hand, the ridiculous takeaway from this scenario is that friendship is fickle, at best, transactional.

One person’s pain became another’s happiness and it only happened because the choice was clear to her and she made it. Ironically, it may not be that simple.

That outburst and the scuffle that followed may belie something deeper than a simply stolen engagement.

That, really, is for us to wonder and the three parties in this love triangle to know.

Ivanka Trump never expected the savage response she got when she tweeted at Prince Harry and Meghan Markle
Students of Kings College, Lagos pictured being punished like animals today (photo)
Mike Adenuga Billionaire’s son says he has had two broken engagements
‘I was never banned at any time from entering America’ – President Buhari replies Atiku
Man laces wife’s drink with poison in Botswana but their 11-year-old son drinks it and dies
Sextape of Cardi B’s fiance Offset with another female leaks on Twitter
Twitter Stories: Guy dating two colleagues in the same office at the same time gets busted and a fight breaks out
Between Davido, Runtown and his new ‘bae’
Boy 19, stabs his stepfather to death and posts his final moments of life on Snapchat (Photos)
Britney Spears, 36, steps out in Hawaii with her 23 year old Iranian, boyfriend (photos)
“My girlfriend is a world famous porn star who has sex with other men and women every day but I don’t mind”: Man says
10 relationship tips that’ll secure your happiness all year long
Mercy Johnson Watch actress as she sings to her husband in bed
Davido ‘FIA’ breaks from ‘Pon Pon’, but it complicates OBO’s winning formula
The world reacts in anger to Donald Trump’s “sh*thole” comments
Juliet Ibrahim warns boyfriend If you mess me up Ghanaians will deal with you
WTH? 10-year-old becomes the youngest sugar daddy and he’s sponsoring a model way older than him