Video: Charly Boy speaks after attack, ‘we will continue tomorrow’ 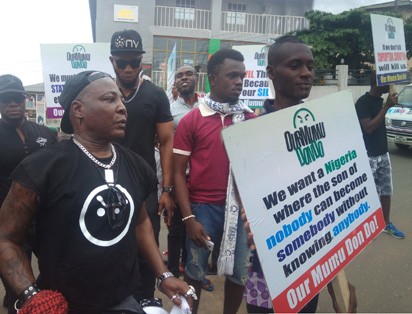 The attacked leader of “OurmumuDonDo” protesters, Mr.Charles Oputa, aka Charly Boy, has reacted to an attack meted on him on Tuesday by mob at Wuse market Abuja, via a video he released on facebook.

According to him, we will be at the unity fountain tomorrow ‘ Wednesday’  by 9am to begin from were we stopped.

Report has it that Charly Boy went into Wuse Market with some co-leaders of ‘OurmumuDonDo’ to see a fellow coordinator, when his fans started chanting his name.

However, the continuous chanting of his name provoked the pro-Buhari‘s who were reported to have been in the same market unnoticed.

It was alleged that pro-Buhari protesters began to throw stones and hard substances at Charly Boy and his cohorts, which left many wounded and Charley Boys BMW vehicle destroyed.

Reacting to the incident, Charly Boy described what happened in Wuse market on Tuesday as unfortunate.

In his words, “I urge you to remain calm, peaceful; there is no cause for alarm. We will be out again tomorrow ‘Wednesday’ at the unity fountain by 9am.

He equally asked for the presence of the police force at the unity fountain on Wednesday to ensure the security of lives and properties.