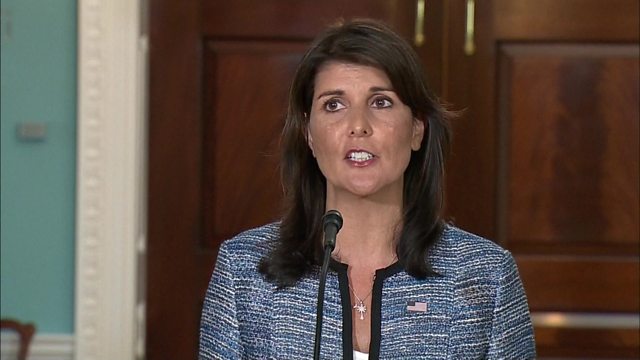 The US has pulled out of the United Nations Human Rights Council, calling it a “cesspool of political bias”.

The “hypocritical and self-serving” body “makes a mockery of human rights”, said US envoy to the UN Nikki Haley.

Formed in 2006, the Geneva-based council has been criticised for allowing countries with questionable human rights records to be members.

But activists said the US move could hurt efforts to monitor and address human rights abuses around the world.

Ms Haley announced her country’s intention to quit the council at a joint news conference with Secretary of State Mike Pompeo, who called the council “a poor defender of human rights”.

UN Secretary-General António Guterres, in a statement released through his spokesman, responded by saying he would have “much preferred” the US to remain in the council.

The move comes amid intense criticism over the Trump administration’s policy of separating child migrants from their parents at the US-Mexico border.

On Monday Mr Hussein has called the policy “unconscionable”.

This is just the latest rejection of multilateralism by the Trump administration, and will likely unsettle those who look to the United States to protect and promote human rights around the world.

The United States has always had a conflicting relationship with the UN Human Rights Council. The Bush Administration decided to boycott the council when it was created in 2006 for many of the same reasons cited by the Trump administration.

The then UN ambassador was John Bolton – who is currently President Trump’s national security adviser and a strong critic of the UN.

It wasn’t until years later, in 2009, that the United States re-joined under the Obama administration.

Many allies have tried to convince the United States to remain in the council. Even many who agree with Washington’s long standing criticisms of the body believe the United States should actively work to reform it from within, rather than disengaging.

What is the UN Human Rights Council?

The UN set up the council in 2006 to replace the UN Commission on Human Rights, which faced widespread criticism for letting countries with poor human rights records become members.

A group of 47 elected countries from different global regions serve for three-year terms on the council.

The UNHRC meets three times a year, and reviews the human rights records of all UN members in a special process the council says gives countries the chance to say what they have done to improve human rights, known as the Universal Periodic Review.

The council also sends out independent experts and has set up commissions of inquiry to report on human rights violations in countries including Syria, North Korea, Burundi, Myanmar and South Sudan.

Why has the US decided to quit?

The decision to leave the body follows years of US criticism.

The country initially refused to join the council in 2006, arguing that, like the old commission, the UNHRC had admitted nations with questionable human rights records.

It only joined in 2009 under President Barack Obama, and won re-election to the council in 2012.

But human rights groups voiced fresh complaints about the body in 2013, after China, Russia, Saudia Arabia, Algeria and Vietnam were elected members.

This followed Israel’s unprecedented boycott of one of the council’s reviews, alleging unfair criticism from the body.

Last year, Nikki Haley told the council it was “hard to accept” that resolutions had been passed against Israel yet none had been considered for Venezuela, where dozens of protesters had been killed during political turmoil.

Israel is the only country that is subject to a permanent standing agenda item, meaning its treatment of the Palestinians is regularly scrutinised.

On Tuesday, despite her harsh words for the UNHRC, Ms Haley said she wanted “to make it crystal clear that this step is not a retreat from our human rights commitments”.

What’s been the reaction?

Some countries and diplomats were quick express disappointment about the US withdrawal.

The UNHRC’s current president, Slovenian ambassador Vojislav Suc, said the body was the only one “responding to human rights issues and situations worldwide”.

After the US decision to quit, he said, “it is essential that we uphold a strong and vibrant council”.

UK Foreign Secretary Boris Johnson said the decision was “regrettable”, arguing that while reforms are needed, the UNHRC is “crucial to holding states to account”.

A number of charities and aid groups criticised the move, with the American Civil Liberties Union saying the Trump administration was leading a “concerted, aggressive effort to violate basic human rights”.

But Israeli Prime Minister Benjamin Netanyahu was quick to support the measure, posting a number of tweets praising the country’s “courageous decision”.