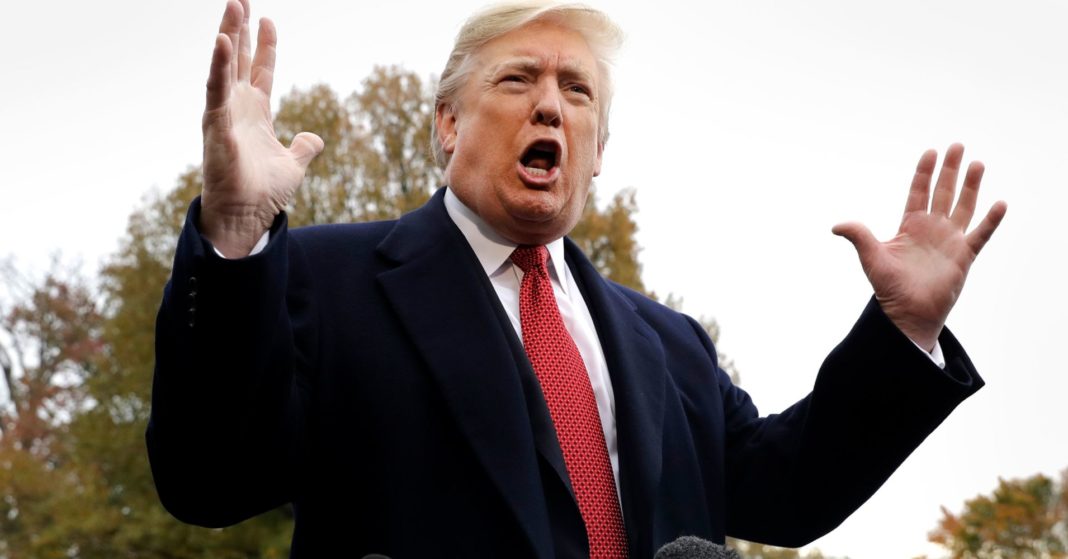 President Donald Trump on Friday said he had not discussed special counsel Robert Mueller’s with acting Attorney General Matthew Whitaker, the man overseeing the inquiry, at least for now.

Whitaker faces increasing scrutiny over his criticism of Mueller’s investigation.

Whitaker, a Trump ally, has accused Mueller of “going too far,” and once tweeted a message likening Mueller’s prosecutors as a “lynch mob.”

He told CNN last year that he could envision a scenario where the person overseeing the probe “reduces [Mueller’s] budget so low that his investigation grinds to almost a halt.”

People close to the president said it was Whitaker’s public skepticism of the probe that drew Trump to take an interest in him, according to a report in The New York Times. The president appointed him on Wednesday, and has Whitaker’s comments should not disqualify him.

“I think everybody looking at a permanent position in any department has done many shows,” Trump said. “Does that mean we can’t hire anybody? We have to hire somebody that’s in a shell? I don’t think so.”

Legal experts have suggested that Whitaker’s appointment as acting head of the Justice Department may be unlawful because he was not confirmed by the Senate to his most recent position in government. Before Wednesday, Whitaker served as chief of staff to Jeff Sessions. If Trump formally nominates him as attorney general, he would face Senate confirmation.

Trump addressed that criticism Friday. He said that Whitaker was confirmed by the Senate following his 2004 appointment as U.S. Attorney for the Southern District of Iowa by President George W. Bush.

That argument is not certain to pass constitutional muster.

In an op-ed co-written by President Barack Obama’s acting solicitor general Neal Katyal and George Conway, a Republican attorney and husband of White House advisor Kellyanne Conway, the two disputed that the 2004 confirmation would permit his appointment.

“Mr. Trump can’t cut and paste that old, lapsed confirmation to today,” they wrote in The New York Times. “For the president to install Mr. Whitaker as our chief law enforcement officer is to betray the entire structure of our charter document.”

Asked about the argument on Friday, Trump said that Conway was just trying to get “publicity” for himself.

“Why don’t you ask Kellyanne that question, all right?” he said.