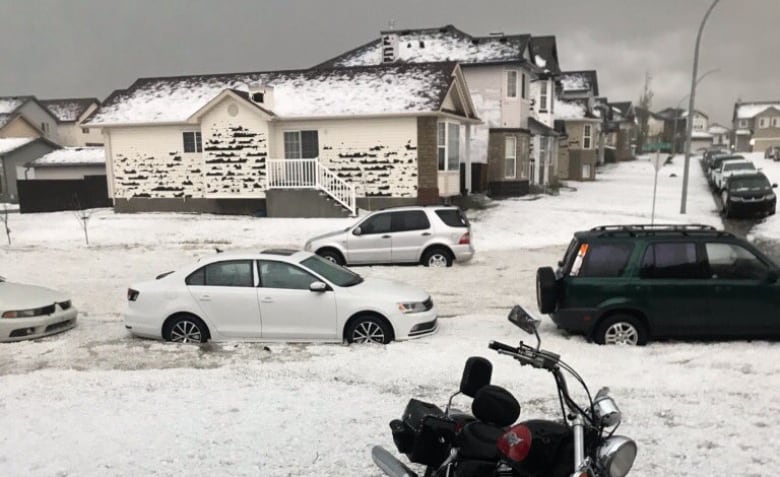 At least one tornado touched down in southeast Alberta on Saturday evening, as severe thunderstorms brought intense hail and flooding to Calgary and the surrounding area.

At 9:05 p.m. MT, a possible tornado was spotted 30 kilometres south of Brooks, moving north at 60 km/h, an emergency alert warned.

Earlier in the evening, the alert had cautioned that a tornado had been spotted near Taber, Barnwell and New Dayton. It was not immediately clear whether each tornado was a separate event, or the same funnel cloud. All tornado warnings for the region ended at around 9:30 p.m.

“This is a dangerous and potentially life-threatening situation…. If you hear a roaring sound or see a funnel cloud, swirling debris near the ground, flying debris, or any threatening weather approaching, take shelter immediately,” an Environment Canada warning had said.

Terri Lang, a meteorologist with Environment and Climate Change Canada, said a tornado may also have touched down southeast of Calgary’s city limits at 7 p.m., but said as of mid-evening there were no reports of damage from any of the possible tornadoes.

In Calgary, torrential rain and intense hail hit the city, flooding many roads and damaging homes and cars.

Environment Canada said its meteorologists were tracking a cluster of severe thunderstorms at 6:47 p.m., stretching from Calgary to High River and moving north at 60 km/h.

“It’s hard to prepare for something like this.… We call it explosive development,” Lang said, adding that 48.7 millimetres of rain fell between 7 and 8 p.m.

Some in north Calgary shared images on social media of the damage: smashed windows, torn siding and broken car windshields.

Lang said hailstones the size of tennis balls were recorded in the northeast Calgary community of Corner Brook.

The hailstones likely fell at a speed of 80 to 100 km/h, she said, some puncturing the plastic sides of barbecues.

“Something like that will do quite a bit of damage,” she said.

“The siding is completely destroyed,” she said. “Her bedroom window has a massive hole in it…. It was the same thing with all the neighbours. Everyone is just with shocked faces walking outside their house, looking at all the damage. She’s really, really shaken and scared.”

Jamal said many people in the neighbourhood are recent immigrants and have never seen hailstorms like this before.

“We just bought our house new five years ago,” she said. “I don’t even know where to begin…. I’ve never seen anything like this.”

The city cautioned that multiple roads were flooded, most in northeast Calgary, including 52nd Street and McKnight Boulevard, and Deerfoot Trail between 16th and 32nd Avenue N.E.

The fire department said on social media that its boat was rescuing stranded motorists on Deerfoot Trail.

CTrain, the city’s light-rail train, was suspended between Marlborough and Saddletowne stations due to flooding, and multiple bus routes in the northeast were suspended as well, as many roads were impassible for much of the evening.

The city said 911 was experiencing a high number of calls and asked those calling in not to hang up, but to stay on the line.

“Many major thoroughfares are currently closed and crews are working to rescue stranded drivers. We also have received reports of missing manhole covers. Drivers are asked to proceed with caution if going out,” Calgary police tweeted at 8:15 p.m.

Coun. George Chahal tweeted that his ward was “devastated” by the severe storm.

“There has been catastrophic damage inflicted on houses and vehicles, and major flooding on many streets,” he wrote at 9:30 p.m.

“A second storm is heading from the south. If you are in danger, call 911 and don’t hang up. Calgary Fire will attend as soon as possible. Please be extremely cautious if leaving your houses tonight.”

According to Enmax’s website, outages due to the storm knocked out power to more than 10,000 people in north Calgary. The majority of the outages were resolved as of 9 p.m.