Tinsley Mortimer: My Two Dogs Are Fulfilling My Motherly Needs 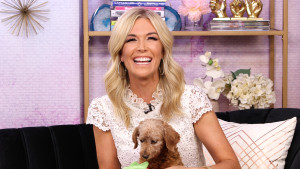 Tinsley Mortimer might be single at the moment, but that doesn’t mean her bed is empty. The 44-year-old socialite is sharing it with her two new poodles – Strawberry and Shortcake – who she rescued from the Yulin Dog Meat Festival in June. Watch the “Hollywood Tails” video above to meet her two adorable new pups. 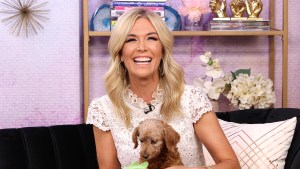 Mortimer, who stopped by Us Weekly’s studio to show off her new four-legged friends, agreed that whoever her future partner may be, they must love dogs. “That, and also dogs are allowed to sleep in the bed. Which is definitely sometimes a deal breaker,” she told Us. “But I’m sorry! Particularly right now, I just want them to feel comfortable. They are sleeping in my bed right now.”

Viewers have seen the reality star talk about freezing her eggs on Bravo’s Real Housewives of New York City, and they’ve also seen her mom, Dale Mercer, express her interest in becoming a grandma. While kids may not be in her immediate future, the two fur babies are certainly fulfilling that motherly need for now!

Former ‘Real Housewives of New York City’ Stars: Where Are They Now?

“They feel like my children. It felt almost like I was giving birth,” Mortimer expressed to Us. “For me it was really emotional. I was crying. It is fulfilling a lot for me, so we’ll see.”

As for her mom, Mortimer was worried she would think the dogs were distracting her from having “real babies,” but, so far, she said, “The whole family was like these are our babies, these are our children.”

Visit No Dogs Left Behind to learn more about how you can help end the Yulin Dog Meat Festival.