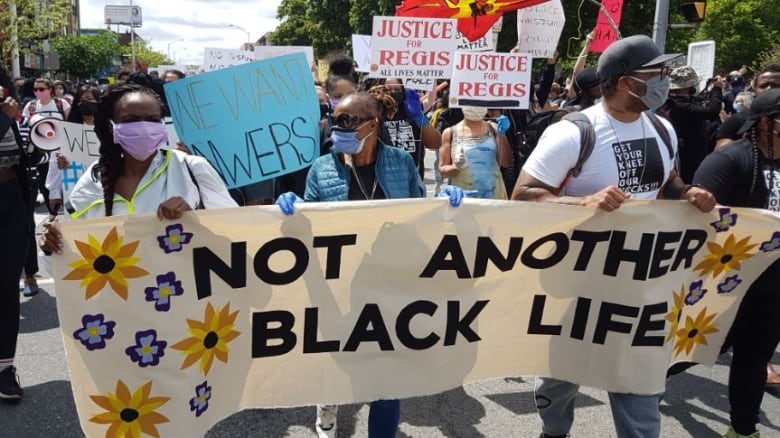 Thousands of people took part in a rally on downtown Toronto streets on Saturday in protest of what organizers described as anti-black and anti-Indigenous racism around the world.

“It’s important for me to be here because if I’m not here than who else is?” Sore Sanni, 17, told CBC Toronto at the rally.

“All lives will not matter until black ones do.”

The peaceful rally, organized by a group dubbed Not Another Black Life, comes on the heels of high-profile, police-involved deaths in both Canada and the United States. Some of the ensuing protests in the U.S. turned violent.

A Minnesota police officer is now facing a murder charge in the death of George Floyd, a black man caught on film pleading for air as an officer knelt on his neck.

Meanwhile, the family of Regis Korchinski-Paquet said what began as a 911 call for help ended in her death. Korchinski-Paquet apparently fell from the balcony of a 24th-floor Toronto apartment while police were in the home on Wednesday.

In Toronto, people chanted “not another black life,” “abolish the police,” and “no justice, no peace” as they wound through the downtown streets clad in face masks to prevent the spread of COVID-19.

Later on Saturday, as the rally turned into a march, others chanted “stop killing black women.”

Police estimated the crowd to be between 3,500 and 4,000 and said there was no violence.

CROWD CONTROL: UPDATE<br>**3:20pm **<br>Bloor St W &amp; Spadina Rd<br>- roads blocked due to large crowd<br>- we respect peoples right to lawful and peaceful protest<br>- our officers will be on site to ensure the safety of everyone involved.<br>^lb

Sanni said the protest was not just about Korchinski-Paquet, but about “every person that has been killed unjustly and treated unfairly by police and our judicial system.”

“As a person of colour and as a black person I am treated differently every day … It’s so sad that I have to come out here in a pandemic to protest black lives.”

Brampton North MPP Kevin Yarde, a member of the Ontario NDP Black Caucus, told CBC Toronto that he participated in Saturday’s event in Toronto to “show support for Regis.”

“She can’t speak and we are here to speak on her behalf.”

Yarde says “too many black lives have been lost over the years,” adding that he will continue to push to “make sure justice is served.”

Hundreds of people have gathered outside of the Toronto Police Headquarters on College and Bay. <br><br>They’ve been marching through the streets all day in response to the death of 29-year-old <a href=”https://twitter.com/hashtag/RegisKorchinskiPaquet?src=hash&amp;ref_src=twsrc%5Etfw”>#RegisKorchinskiPaquet</a> <a href=”https://t.co/FW0ZzFwIZT”>pic.twitter.com/FW0ZzFwIZT</a>

Meanwhile, police said hundreds attended a similar protest in Halifax on Saturday. No arrests were made.

“Police were on hand simply to ensure the safety of the participants and the public. We appreciate that attendees conducted themselves in a peaceful manner.”

A rally also is scheduled for Montreal on Sunday.

Racism a ‘fact in our society,’ Toronto mayor says

A lawyer representing Korchinski-Paquet’s family says her relatives do not want to see violence, only answers as to how and why she died.

In a statement released Saturday, lawyer Knia Singh says the family did not organize or plan the protest. The family says it thanks organizers for bringing attention to a “very serious matter.”

Some of the thousands of people marching in Toronto <a href=”https://t.co/PkOZX7qFwk”>pic.twitter.com/PkOZX7qFwk</a>

Ontario’s Special Investigations Unit is looking into the death of Korchinski-Paquet, as questions swirl around exactly what happened in the moments leading up to her death.

Korchinski-Paquet was described as an active member of her church, a talented gymnast and proud of her Ukrainian and Nova Scotian roots.

On Friday, Toronto police Chief Mark Saunders urged calm in the wake the incident, warning of an information “vacuum” faced by police that risks being filled by “opportunists.”

Toronto Mayor John Tory called the community’s anger over her death understandable, describing anti-black racism as “a fact in our society” and encouraging protesters to practise physical distancing in light of the ongoing COVID-19 pandemic.

Meanwhile, a petition on Change.org demanding “justice” for Korchinski-Paquet has drawn over 50,000 signatures.

Thousands of people are taking part in a rally on downtown Toronto streets on Saturday in protest of what organizers describe as anti-black and anti-Indigenous racism around the world. 8:03
Share
Facebook
Twitter
WhatsApp
Pinterest
Linkedin
ReddIt
Email
Print
Tumblr
Telegram
Mix
VK
Digg
LINE
Viber
Naver
Previous articleCOVID-19 has Calgary seniors walking around province, across country but virtually
Next articleCan a store make me wear a mask to shop? Your COVID-19 questions answered