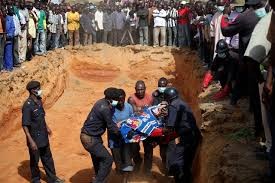 Earlier today, presidential media aide, Femi Adesina, attacked PDP for holding a 7-day mourning period for victims of the massacre that took place in Plateau state over the weekend. Femi in his statement listed the number of mass killings that took place while PDP was in power.

In a statement released this evening, the opposition party condemned the presidency for making reference to killings that took place while they were in ofice. Read the statement below

The Peoples Democratic Party (PDP) expresses shock by the statement credited to the Buhari Presidency justifying its failure to stem the tide of killings and bloodletting in the country, particularly in the Plateau, Zamfara, Benue, Yobe, Adamawa, Borno, Kogi, Taraba and other troubled states.

It is indeed reprehensible that the Presidency in its usual arrogance and insensitivity to the mood of the nation chose to condemn the PDP for declaring a seven-day mourning and flying our flags at half-mast in honour of the dead and solidarity with the bereaved.

It is disturbing that even in death, the Buhari Presidency still wants to deny these victims of callous murder the honour of being mourned.

We are particularly appalled that instead of joining Nigerians in mourning the dead and seeking ways to stem the escalation of the bloodletting under its watch, the Buhari Presidency is engaged in morbid reference to past killings as if the lives of Nigerians have no value under President Buhari’s watch.

The PDP, as a party, will continue to identify with Nigerians at this troubled time irrespective of ethnic, religious and political affiliations and will therefore not allow itself to be dragged into a needless mire with the Buhari Presidency, which has shown by its statement, that it has no iota of regard for the lives of Nigerians.

PDP urges the Buhari Presidency to confront the challenge of fulfilling the basic responsibility of governance by providing security to the lives and property of all Nigerians irrespective of their creed, tribe and political affiliations.

Finally, the PDP assures Nigerians that we will not be deterred in speaking out against the killings and the failure of the Buhari administration to take concrete steps to stem this ugly tide.