The latest battle between Alberta and Ottawa? A personal vehicle ban at this popular tourist site 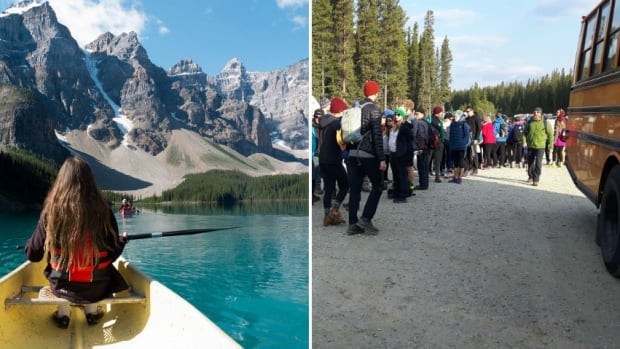 Alberta’s Forestry, Parks and Tourism minister is taking issue with a decision by Parks Canada to close off access to Moraine Lake for those travelling by personal vehicle.

In an open letter, released Monday on Twitter, Todd Loewen called on federal Minister of Environment and Climate Change Steven Guilbeault and Minister of Tourism Randy Boissonnault to reconsider, look at other options and bring the Alberta government to the table to ensure the province remains a world-renowned destination open to all.

“Alberta’s parks — both provincial and national — are jewels of the province, and Albertans and visitors alike deserve to have full access to enjoy their benefits,” he said in the letter. “Parks Canada’s decision to block personal vehicles at Moraine Lake means fewer visitors to this important part of the province.”

Parks Canada has limited access to the lake to its shuttle buses, Roam Transit, commercial buses and taxis from June to mid-October. The road was already closed to traffic during the long winter season.

In response to Loewen’s letter, Parks Canada provided a statement Monday. The organization wrote that most visitors to Moraine Lake are turned away, leading to frustration and sometimes anger directed at traffic management staff.

“Since 2018, Parks Canada has had to actively manage an increasing amount of traffic along Moraine Lake Road,” read the statement. “While in previous years, traffic management occurred between sunrise and sunset, in 2022, flaggers were required 24 hours a day to manage an increase in demand for access to the Lake.”

At peak times of summer 2022, the parking lot was at capacity nearly 24 hours a day. Parks wrote that about 900 vehicles did gain access to the lake on a daily basis, while approximately 5,000 were turned away.

“Other options based on continued private vehicle access, including reservable parking spaces, were considered,” read the statement. “However, the demand for parking so greatly exceeds the capacity of the parking lot and the space available for vehicle and parking management, that these options offered fewer benefits than shifting to a shuttle system.”

Moraine Lake is among the most visited destinations in Canada, according to Parks Canada. And many wanting to hike, explore or photograph the beautiful lake and surrounding mountains were waking up in the middle of the night to secure a parking spot.

While the popular destination is outside of the Town of Banff’s jurisdiction, Mayor Corrie DiManno applauds the move by Parks Canada.

“I’m sure they put a lot of careful thought into a situation that was becoming unmanageable,” said DiManno. “I applaud the effort there.”

Now, the town will watch closely for any implications for the Banff townsite, where Roam has established a transportation hub. DiManno pointed out that Banff is where buses leave for a direct route to Moraine Lake during larch season, and she’s open to further discussions.

“It’s about needing to change to stay the same,” DiManno said. “So protecting our environment is going to mean shifting our behaviour when it comes to how we access and enjoy this very special place. And so for me, that is really around mass transit.”

Many online are lamenting the change, saying it will eliminate access to sunrise hikes.

“Sunrise and sunset hikes or night photography are near impossible to achieve under this plan, unless people can afford to pay for commercial transport or travel unsafely by foot or bike in the dark,” Loewen noted in his letter.

Some dog owners are worried shuttle services won’t include their furry friends. Parks Canada’s visitor information page states pets are allowed on the shuttle under the condition it is “crated in a secure and clean carrier, designed and intended for the carrying of animals, which is small enough to fit on the owner’s lap.”

Parks Canada has promised to monitor these changes, including the prices of commercial transportation options, and make adjustments as necessary.