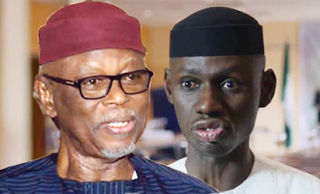 Comrade Timi Frank, the deputy national publicity secretary of APC who is currently under suspension has laid the blame for Atiku’s exit from the party squarely on the shoulders of party chairman, John Odigie-Oyegun. He accused the chairman of mishandling party affairs and said the exit of the former vice president and founding member of the APC will backfire.

According to him, the party chairman should have remained sober “because that was how he (Oyegun) chased out President Muhammadu Buhari from the defunct ANPP but Thursday Buhari is the president. When you eat from a man and come back to talk evil of the same man, prosperity will definitely judge in this case. Oyegun is one of the biggest beneficiaries of Atiku in APC, we expect him to have little fear of God while talking in public.

“One should have expected our national chairman to focus on how to rebuild the APC now instead of concentrating his energy on Atiku Abubakar who is no more with us. I hope Chief Oyegun will learn from the history of Alhaji Bamanga Tukur and the PDP when some of us were leaving the party. The party later paid the price and if care is not taken APC too will pay the price of Oyegun’s incompetency in 2019.
“Our national chairman ought to know that politics is a game of numbers, so we expect him to take responsibility for everyone leaving the ruling party to the opposition party under his watch. If Oyegun thinks that Atiku’s exit won’t create any impact, time will tell but I will still advice the party to relieve Chief Oyegun of his office before he anger more people to leave the APC. Atiku actually left APC because of such national chairman who could not ensure internal democracy. Under Chief Oyegun, aspirants alleged that primary elections were won by higher bidders, party constitution suspended, display of impunity were the order of the day, inability to put BoT in place, lack of capacity to organise convention and other necessary meetings. So, Nigerians will expect our chairman to tell the world the value he has added to the ruling party? This is a national chairman who has never won election for APC even in his ward, how can he challenge a former vice president of Nigeria who has added values to democracy and even to the ruling party before he left.”

Previous articlePolitics Democrats are setting themselves up perfectly to pummel Republicans on sexual harassment in 2018
Next articleAfter IS, Libya yearns for normality