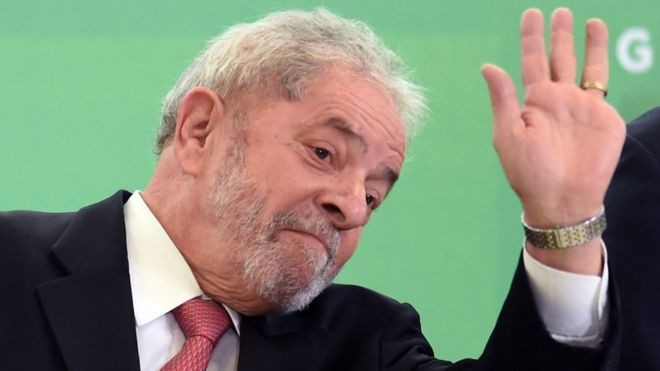 Former Brazilian President Luiz Inácio Lula da Silva will be imprisoned while he appeals his corruption conviction, the country’s Supreme Court has ruled.

He is facing 12 years in jail on charges of accepting a bribe but had asked to remain free during his appeal.

Lula claims the charges are politically motivated, and designed to prevent him from running in October’s presidential election.

Polls suggest he is the top candidate in the race.

The Supreme Court judges ruled against him by six to five after a marathon session, which ended in the early hours of Thursday morning.

The BBC’s Katy Watson said that Lula watched the ruling at the Metalworker’s Union, where his supporters held an upbeat concert.

The 72-year-old former president is likely to remain free for a short time, until paperwork for his arrest is completed.

Lula served as president between 2003 and 2011. Despite his lead in current polls, he remains a divisive figure in Brazil.

Up to 20,000 people protested in São Paulo on Tuesday calling for his immediate imprisonment, while supporters also rallied in large numbers in a rival demonstration.