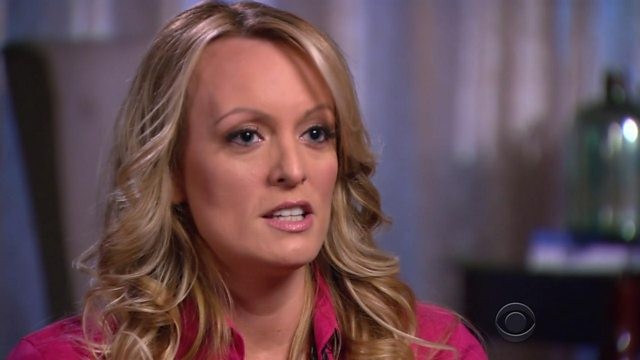 She told CBS News a man had approached her in a Las Vegas car park in 2011.

The stranger allegedly said “leave Trump alone”, then looked at her young daughter and added: “It’d be a shame if something happened to her mom.”

Mr Trump strongly denies having had an affair with the actress.

His lawyers are seeking $20m (£14m) in damages from her, saying she broke a non-disclosure deal signed before the 2016 presidential election. She says the claim is invalid.

Ms Clifford said she had had sex with Mr Trump just once, in a hotel room during a celebrity golf tournament in Lake Tahoe, California, in July 2006. Mr Trump married Melania Trump in 2005.

What exactly did Stormy say?

She told the 60 Minutes show, which aired on Sunday evening, that she had been approached by the man in the car park after having agreed to tell her story to a magazine.

“I was in a parking lot, going to a fitness class with my infant daughter,” she said.

“A guy walked up on me and said to me, ‘Leave Trump alone. Forget the story’. And then he leaned around and looked at my daughter and said, ‘That’s a beautiful little girl. It’d be a shame if something happened to her mom’. And then he was gone.”

President Trump has not responded to the latest allegations.

He was at his Mar-a-Lago estate in Florida over the weekend but returned to the White House ahead of the interview on the 60 Minutes show.

Mrs Trump, however, is staying in Florida, a White House spokeswoman said.

What is alleged to have happened in 2006?

Ms Clifford told CBS that her only sexual encounter with Mr Trump took place after he invited her to dinner in his hotel suite.

She said he had shown her a magazine with his picture on the cover and she had jokingly smacked his bottom with it.

“He turned around and pulled his pants down a little, you know [he] had underwear on and stuff, and I just gave him a couple swats,” she said.

Ms Clifford said that although she had not been attracted to Mr Trump, she had had sex with him, adding: “I didn’t say no. I’m not a victim.”

Mr Trump, she added, had suggested she might appear in his TV game show, The Apprentice, and she thought of the encounter “as a business deal”.

What about the money?

Ms Clifford told CBS she had accepted “hush money” from Mr Trump’s personal lawyer because she was concerned for the safety of her family.

She has previously said she was paid the $130,000 by lawyer Michael Cohen to remain silent about the affair just before the 2016 election.

Mr Cohen confirmed in February he had privately paid her the money but did not say what it was for. Mr Trump’s critics have suggested the money might amount to an illicit campaign contribution.

Mr Cohen said last month that neither Mr Trump nor the Trump Organization were parties to the transaction.

How are Stormy’s allegations different?

Ms Clifford is one of three women who have launched legal action over alleged affairs or sexual assault claims involving Mr Trump.

Her lawyer, Michael Avenatti, told the BBC his client’s case was different to others’ because of “acts of intimidation and the tactics that have been used to silence my client”.

“I think that is very problematic and it should be very disturbing to not only the American people but anyone in western civilisation,” he added. “That is not how people in power should conduct themselves.”