Shamima Begum: IS teen’s return to UK ‘could be prevented’ 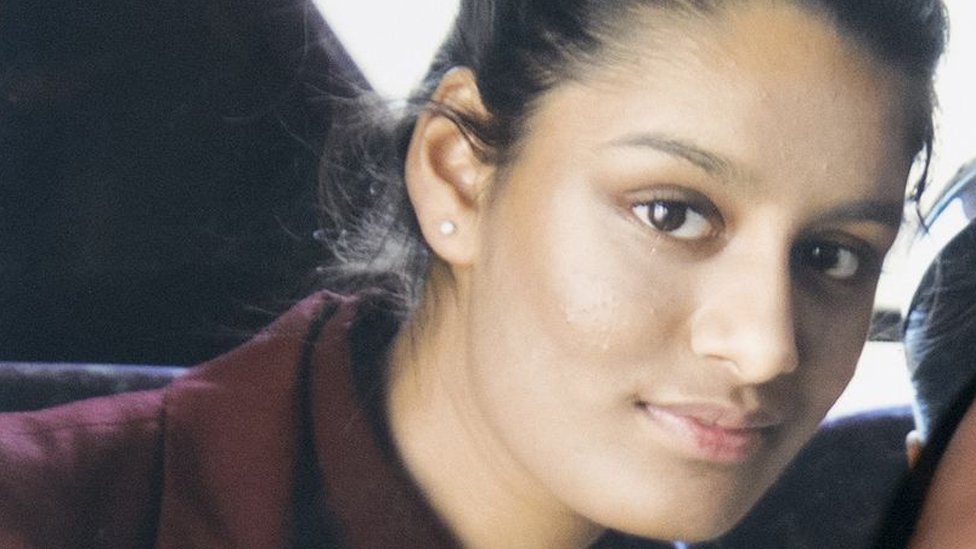 A British woman who fled to Syria as a schoolgirl to join the Islamic State group could be prevented from returning to the UK, the home secretary has said.

“My message is clear,” Sajid Javid told the Times: “If you have supported terrorist organisations abroad I will not hesitate to prevent your return.”

He added that if Shamima Begum, 19, did come home she could be prosecuted.

Ms Begum, who is pregnant, told the paper she had no regrets but wanted to have her baby in the UK.

“We must remember that those who left Britain to join Daesh were full of hate for our country,” Mr Javid said.

“If you do manage to return you should be ready to be questioned, investigated and potentially prosecuted.”

Mr Javid added that there were a range of measures available to “stop people who pose a serious threat from returning to the UK, including depriving them of their British citizenship or excluding them from the country”.

The controversial legal tool bars a British citizen from returning home until they have agreed to investigation, monitoring and, if required, deradicalisation.

However Lord Carlile, a former independent reviewer of terrorism legislation, said Ms Begum would have to be accepted back into the UK if she had not become a national of any other country.

Under international law, it is not possible to render a person stateless.

Will Shamima Begum be allowed to return to the UK?

Shamima Begum was legally a child when she pinned her colours to the Islamic State mast.

And if she were still under 18 years old, the government would have a duty to take her and her unborn child’s “best interests” into account in deciding what to do next.

But she’s now an apparently unrepentant adult – and that means she would have to account for her decisions, even if her journey is a story of grooming and abuse.

Another British jihadi bride, Tareena Shakil, who got out of the war zone with her child, lied to the security services on her return and was jailed for membership of a terrorist group.

If Ms Begum got out of the country, that is the kind of charge she could face – along with encouraging or supporting terrorism.

But that’s a long way off. Assuming she made it to an airport, the UK could temporarily ban her from returning until she agreed to be investigated, monitored and deradicalised.

Social services would also certainly step in to consider whether her child should be removed to protect him or her from radicalisation.

In an interview with the Times, Ms Begum, who married an IS fighter, showed little remorse for her involvement with the terror group and said she was not fazed by seeing “beheaded heads” in bins.

“I’m not the same silly little 15-year-old schoolgirl who ran away from Bethnal Green four years ago,” she said.

However, she said that after the “shock” of losing two children to illness while living in Syria, she was scared her unborn baby would also die if she stayed in the refugee camp to which she fled last month.

She said: “I’ll do anything required just to be able to come home and live quietly with my child.”

Ms Begum said life in the one-time IS stronghold of Raqqa had lived up to her expectations: “The life that they show on the propaganda videos – it’s a normal life.

“Every now and then there are bombs and stuff. But other than that…”

But she said she felt the IS “caliphate” was at an end.

“I don’t have high hopes. They are just getting smaller and smaller,” she said. “And there is so much oppression and corruption going on that I don’t really think they deserve victory.”

Ms Begum’s family have appealed for the teenager to be shown mercy.

Her brother-in-law Mohammed Rahman, 36, told the Times: “She was so young – I don’t think she had the life experience to make those decisions.”

“I think the hope would be that she would be allowed to return home, as long as the government is satisfied she has turned her back on their ideology,” he said.

Ms Begum was one of three schoolgirls, along with Kadiza Sultana, 16, and Amira Abase, 15, from Bethnal Green Academy in east London, who left the UK for Syria in February 2015.

She escaped from Baghuz – IS’s last territory in eastern Syria – two weeks ago.

Her husband surrendered to a group of Syrian fighters as they left, and she is now one of 39,000 people in a camp in northern Syria.

Diane Foley – whose son James, an American journalist, was kidnapped and beheaded by IS seven years ago – said that the group’s supporters did not “necessarily” have to be treated as criminals and deserved a trial.

She told BBC Radio 4’s Today programme that she felt “very strongly that Isis continues to be a threat”, adding: “It’s very difficult to discern how much of a threat they continue to be when they want to return home.

“We have to be very careful and very vigilant with any of these folks who have been involved in so many human rights atrocities.”

IS has lost control of most of the territory it overran, including its strongholds of Mosul in Iraq and Raqqa in Syria.

However, fighting continues in north-eastern Syria, where the Kurdish-led Syrian Democratic Forces (SDF) say they captured dozens of foreign fighters in recent weeks.