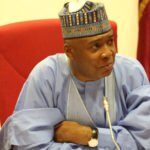 The Senate on Tuesday passed the bill on Mutual Assistance in Criminal Matters between Nigeria and other foreign countries in the fight against corruption and other cross border crimes.

The bill seeks to enhance collaboration and mutual assistance between the Nigerian government and its foreign counterparts.

It will also facilitate identification, tracing, freezing, restraining, recovery, forfeiture and confiscation of proceeds of crime wherever they are located.

The bill was presented by the Chairman of the Committee on Judiciary, Senator David Umaru.

Senator Umaru said when passed, the bill promotes mutual assistance in criminal matters between Nigeria and other foreign countries.

The bill was a joint effort among the Judiciary, Human Rights, Anti-Corruption, Financial Crimes, and Foreign Affairs committees of the upper legislative chamber.

One of the highlights of the bill is the removal of territorial jurisdictional constraints to the fight against corruption.

“The globalisation and advancement in information and communication technology have made it imperative for a legislation of this nature to be put in place, in order to promote cooperation in the prosecution of cross border offenders and transnational organized crimes,” Umaru said.