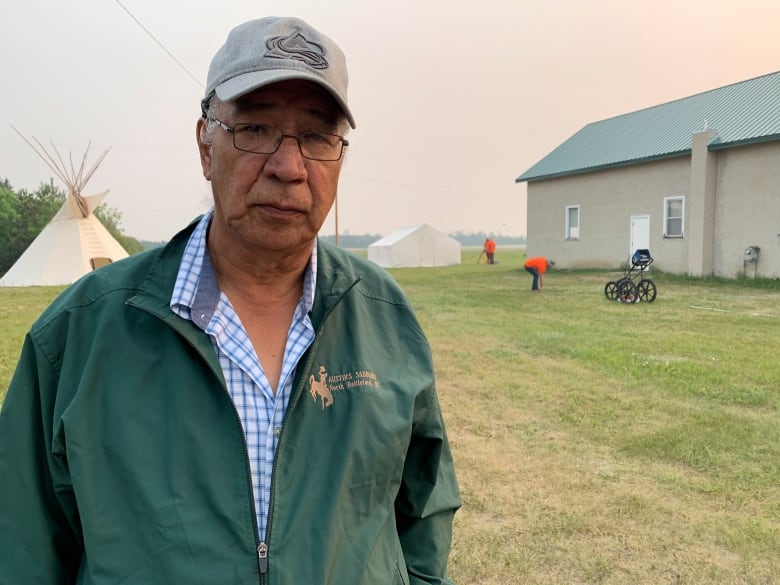 A weekend of searching for unmarked graves is now underway at the site of the former Delmas Indian Residential School in Saskatchewan.

The Battlefords Agency Tribal Chiefs, a council that represents six First Nation communities in the area, announced on Thursday it had partnered with SNC Lavalin to conduct a ground-penetrating radar search of the school site, about 30 kilometres northwest of the Battlefords.

According to the National Centre for Truth and Reconciliation, students at the school, which was also known as the Thunderchild or St. Henri Indian Residential School, often suffered from a wide range of illnesses, including typhoid, scarlet fever, tuberculosis, jaundice and pneumonia.

The centre lists the names of more than 40 students who are known to have died while they were forced to attend the school, or soon after being discharged.

On Saturday, residential school survivors, elders and members of the public gathered at the former school grounds, along with the people who now own the land where the school stood.

Karen Whitecalf, a project manager who organized the weekend search on behalf of the tribal council, said she feels it’s important to have people at the site.

“Our people knew that our children lay on these grounds. We always knew it,” she said.

“We shouldn’t keep secrets anymore. So we welcome everybody here.”

Whitecalf said she wants to see healing for the community of Delmas and for the First Nations people whose children were taken to the school.

The Delmas Indian Residential School was established by the Roman Catholic Church and operated by oblates from 1901 to 1948, when the school burned down.

Survivors who were there the last year the school operated told CBC News they believed the fire could have been deliberately started by students.

Noel Moosuk, an elder from Red Pheasant Cree Nation, said his mother and father were taken to the Delmas Indian Residential School.

Moosuk said while he expects this weekend’s search to be tough, he’s happy to be a part of the efforts.

“History has to be rewritten. There’s still stories that we have to tell,” he said.

The ground-penetrating radar searches, he said, will help in telling the untold stories of the residential school.

The Delmas site is the latest to be searched using ground-penetrating radar. That method was previously used to detect 751 “hits” at the site of the Marieval Indian Residential School in Cowessess First Nation, east of Regina. Each “hit” could represent one or more sets of human remains.

A final tally of the number of “hits” recorded by ground-penetrating radar at the Delmas site isn’t expected to come this weekend, but Moosuk said he thinks remains of children from surrounding reserves will be discovered.

Saturday’s search marked the start of the first step in Battlefords Agency Tribal Chiefs’ efforts. Five more steps are planned, which include search efforts at the Battleford Industrial School site in August or September.