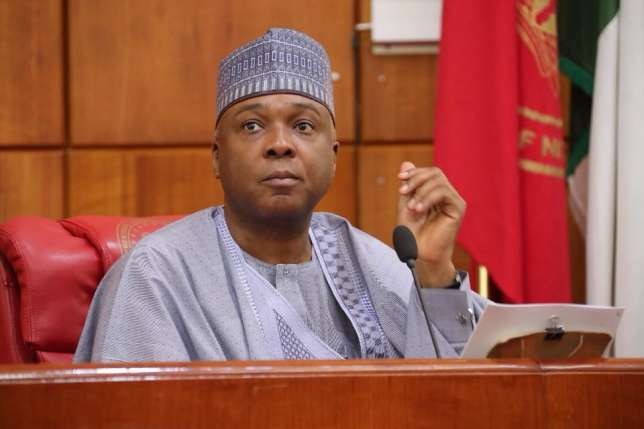 The Senate President, Bukola Saraki has described the hijacking of the mace by protesters as a disgrace.

Saraki said this at 4th Anniversary Lecture of online media platform, The Nitche, which held in Lagos.

According to reports, Senator Ovie Omo-Agege allegedly led thugs to the National Assembly complex on Wednesday, April 18, 2018 to steal the mace.

Omo-Agege was suspended for 90 legislative days for rescinding on his apologies over his support for President Muhammadu Buhari.

He was suspended on Thursday, April 12, 2018 during plenary session over his remarks that the amendment of the 2010 Electoral Act is targeted at Buhari.

The Senate President said “What happened was a disgrace. It made no sense if you think about it, and it was a very primitive adventure.

“If they were looking for a routine change, it was better they followed due process.”

“If you were to impeach the President, for instance, you go through the impeachment process and involve the House.

“You will have to get a simple majority or three quarters of the members to get him out. And where you are unable to do that, you simply walk away,” he added.

The Nigerian Police has found the Senate’s mace which was snatched by hoodlums at plenary.

According to a statement made available to Pulse by the deputy PRO, Aremu Adeniran  the mace was abandoned at the City Gate.