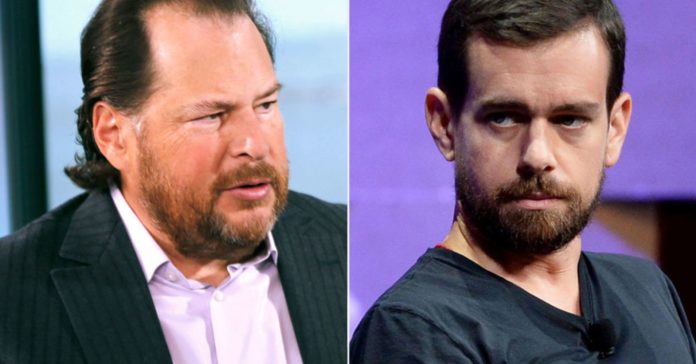 When Dorsey voiced his opposition to a bill that would increase taxes on big businesses to raise money for homeless services, Benioff questioned his fellow CEO’s personal and financial commitment to the problem while highlighting tax breaks Twitter has previously received.

Proposition C, which will appear on San Francisco ballots in November, proposes a new tax on the city’s largest businesses that could generate up to $300 million annually to aid its homelessness crisis. Benioff has strongly endorsed Prop C, pledging up to $2 million to support the measure, which could cost Salesforce up to $10 million in additional taxes a year.

Dorsey, however, has sided with the proposition’s detractors, including San Francisco Mayor London Breed and state Sen. Scott Wiener, who argue that the proposition lacks the proper accountability and oversight.

After Dorsey disagreed with Benioff’s support of Prop C on Twitter, Benioff fired back by asking Dorsey, who is also CEO of Square, about his and his companies’ financial contributions to fighting homelessness.

For years, Dorsey’s companies have benefited from the Central Market Tax Exclusion, commonly called the “Twitter Tax Break,” which encourages companies to maintain offices in a rough neighborhood in San Francisco.

Dorsey responded by telling Benioff that he was “distracting” from his support of Mayor Breed:

Benioff and Dorsey have a history: The Salesforce CEO tried to buy Twitter in 2016.

Overall, more than 7,000 people experience homelessness in San Francisco, where detritus indicative of human suffering on the street stands in stark contrast with the city’s overall tech-fueled wealth.