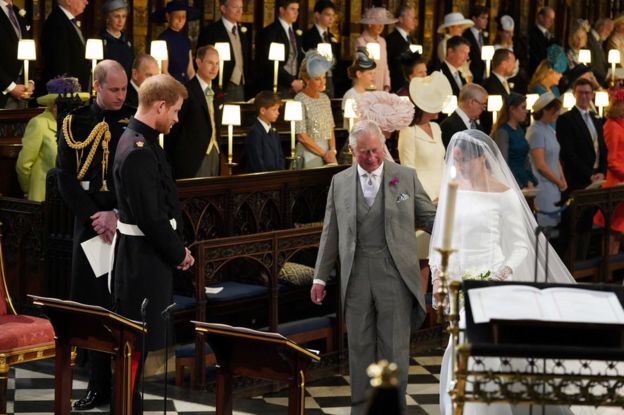 The Duchess of Sussex’s father, Thomas Markle, has revealed his daughter cried when he told her he would not be attending her wedding to Prince Harry.

He also revealed his upset at not walking her down the aisle.

“I’m a footnote to the greatest moment in history rather than the dad who walked his daughter down the aisle. That upsets me somewhat,” he told ITV’s Good Morning Britain.

He said he watched the event from a B&B in the US after having surgery.

Mr Markle told GMB he broke the news that he would not be attending the event in an emotional phone call with Prince Harry and his daughter.

“They were disappointed … and they both said, ‘Take care of yourself, we are really worried about you’,” he said.

Prince Charles walked the duchess down the aisle instead of her father.

Mr Markle said he felt “jealous”, but added: “I was honoured, I can’t think of a better replacement than someone like Prince Charles.

“I was thrilled to tears he was doing that, I just wish it had been my hand holding hers not his.”

Describing the moment Prince Harry asked for his daughter’s hand in marriage, Mr Markle said he told his future son-in-law: “You are a gentleman, promise me you will never raise your hand against my daughter and of course I will grant you my permission.”

Mr Markle also said he discussed politics, including the US president and Brexit, with Prince Harry.

“I was complaining about not liking Donald Trump, he said ‘give Donald Trump a chance,'” Mr Markle said.

When asked about their Brexit discussion, he said: “It was just a loose conversation… I think he [the Duke of Sussex] was open to the experiment.”

In the run-up to the wedding Mr Markle became embroiled in a controversy over reports he had staged paparazzi photos of himself in wedding-related activities, such as being measured for a new suit.

He explained that it was meant to be “a way of improving my look”, adding: “Obviously that all went to hell.”

He said he apologised to both Harry and Meghan.

“I realised it was a serious mistake. It’s hard to take it back.”