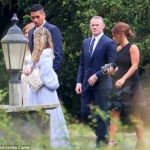 They ended their season on a high after winning the Europa League.

And the Manchester United players were again in a celebratory mood as they attended the star-studded wedding of defender Phil Jones and wife Kaya Hall in Nether Alderley, Cheshire, on Friday.

Wayne Rooney and his glamorous wife Coleen were among the famous guests seen arriving at St Mary’s Church for the romantic ceremony.

Wayne, 31, looked dapper in a navy suit and tie as he arrived with Coleen, 31, who opted for a stylish one-shoulder dress for the occasion.

Newlywed Kaya meanwhile looked every inch the beautiful bride in a stunning lace ivory gown as she left the church hand in hand with news husband Phil.

Wearing her chestnut brown locks up in an elegant up ‘do, she showed off her radiant complexion, while her lips accentuated with a rose-tinted lipstick.

The happy couple left in a white vintage car as the guests headed to the reception after the church ceremony.

Phil and Kaya announced they were set to get married in December, with Kaya posting on Twitter: ‘Christmas Eve Service at the Church we’re getting married at…’

The pair, who live in Alderley Edge, have been together for several years, with Kaya attending the Manchester United Christmas party back in December.

Phil Jones was not the only Red Devils player to get married this week, with Matteo Darmian marrying his long-term fiancee Francesca Cormanni in a lavish wedding ceremony in Italy on Wednesday.