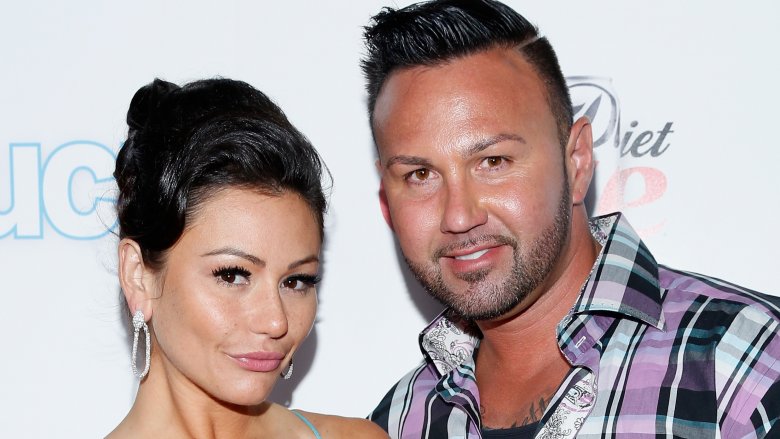 Roger Mathews has something to say.

On Thursday, April 25, 2019, the businessman broke his silence on the news that his estranged wife, Jenni “JWoww” Farley of Jersey Shore fame, has moved on with a new man amid their ongoing divorce.

“He seems like a terrific guy and they seem to really be happy, and I’m very happy for them,” Mathews released in a statement to Page Six. Noting that Farley and her mystery man have actually been an item for “a few months” now, he revealed that her beau is a “good friend of her little brother.”

Mathews went on to give an update on the former couple’s co-parenting situation, which thankfully seems to be much more amicable these days. He and Farley share daughter Meilani Alexandra, 4, and son Greyson Valor, 2. “Co-parenting has been getting much easier and we have a very friendly relationship and do things as a family together which makes the kids very happy,” he said. “Wish her nothing but positive things.”

Readers may be aware that Farley publicly addressed her blossoming romance with an unnamed 24-year-old man just the day before during an appearance on the It’s Happening With Snooki & Joey podcast. “We’re filming Jersey Shore right now and we nicknamed him ’24,'” Farley told longtime MTV co-star Nicole “Snooki” Polizzi. For her part, Polizzi, who’s currently pregnant with baby no. 3, said, “He’s very handsome, by the way. Jenni has been going through some s**t, but I’ve never seen this girl more happier and more herself than this moment right now.”

As Nicki Swift previously reported, Farley, 33, filed for divorce from Mathews, 43, in September 2018 after nearly three years of marriage. According to court documents obtained by the Ashbury Park Press at the time, “The plaintiff and the defendant have irreconcilable differences which have caused the breakdown of the marriage for a period of at least six months which make it appear that the marriage should be dissolved and that there is no prospect of reconciliation.” In addition to reportedly seeking child support from her ex, Farley also reportedly requested primary custody of the celeb pairing’s children.

Around that time, Mathews took to Instagram to tell fans that he wasn’t “done fighting” for their marriage. By that November, he and Farley were reportedly “working on things” in their relationship. However, things seemed to take a turn for the worst the following month when Mathews claimed that his ex had filed a restraining order against him after an argument.

Weeks later, Farley publicly accused him of physical abuse in a shocking message on her website. “You are an abuser to the core, Roger Mathews,” she wrote at the time (via Us Weekly). “You have spit at me. You have pushed me. You have shoved me. You have aggressively thrown me to the ground. You have prevented me from closing doors to escape having you coming at me. You have belittled and disparaged me. You have threatened me.” Mathews later denied the allegations.

Earlier this month, Polizzi, 31, opened up about Farley’s headline-making divorce drama to E! News, saying, “Jenni is doing amazing, everyone’s going through their own s**t right now, it’s like, we should have a reality show … we do!” After admitting that Farley’s been going through an “obviously hard [time]” in recent months, Polizzi added, “I’ve never seen her more confident and happier and, you know, just things don’t work out. So, hopefully, everything will work out, they could co-parent and call it a day.”

We couldn’t have said it better ourselves! We’re so glad to see that Jenni “JWoww” Farley and Roger Mathews, who recently spent Easter Sunday together with their kiddos, seem to be on much better terms nowadays. However, those fans who are holding out for the duo to rekindle its romance probably shouldn’t hold their breath. On April 8, 2019, Farley’s rep stated to Us Weekly, “Jenni’s kids’ needs and wants will always come first. She is being an adult about the divorce and working toward being better [co-parents].” Her rep added, “As far as the divorce, there is no reconciliation in the future and she is excited about continuing to move on with her life.”