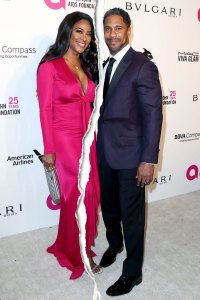 Kenya Moore may have her peach back, but she’s flying solo for season 12 of The Real Housewives of Atlanta.

‘Real Housewives’ Couples Who Filed for Divorce After Appearing on TV

The 48-year-old Bravo star announced her split from her husband, Marc Daly, on Thursday, September 19. The twosome tied the knot in June 2017. A year later, they welcomed their daughter Brooklyn, now 10 months.

“It is with profound sadness that I regret to inform my fans that I am divorcing my husband, Marc Daly,” Moore said in a statement to Us Weekly on Thursday. “Due to recent and ongoing circumstances, I can no longer continue in the marriage. My sole concern and focus is and will always be my daughter, Brooklyn, my miracle baby. She was made in love and true commitment. I ask for our privacy to be respected moving forward.”

Us confirmed in July that Moore, who initially starred on seasons 5-10, is returning to RHOA for season 12 after taking the year off. She confirmed she was a full-time cast member by showing off her peach later that month.

“I was hungry so I snatched a ?,” she wrote via Instagram.

It’s unclear if Daly has filmed any scenes for the upcoming season, but production is well underway. Earlier this week, the couple appeared to be in good spirits on an episode of The Tamron Hall Show as they opened up about their IVF journey.

“It’s incredibly challenging because the success rate for these these treatments are very low,” Daly said. “There’s expectations, but you also have to be prepared for disappointed. So just being there, being supportive, being hopeful, being positive and just being behind her was what it’s all about.”

Former ‘RHOA’ Stars: Where Are They Now?

Moore, meanwhile, called Daly the “love of my life” during the Monday, September 16, episode of The Tamron Hall Show.

The Real Housewives of Atlanta will return is expected to return to Bravo later this year.