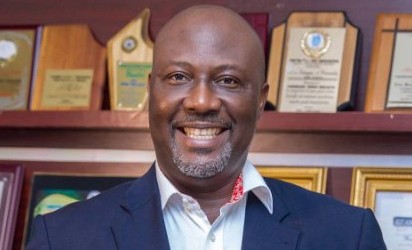 Produce my accusers dead or alive, Melaye tells Police
Melaye arms saga: Suspects escape from custody, Produce my accusers dead or alive, Melaye tells Police LOKOJA—Kogi State Police Command, yesterday, declared wanted, Senator Dino Melaye, senator representing Kogi West and Mohammed Audu, son of the late governor of the state, Abubakar Audu. Dino Melaye Melaye was declared wanted on a day the six suspects, who accused him of supplying arms to them, including Kabiru Seudu (aka Osama) and Nuhu Salish (aka Small) escaped from custody. The suspects were said to have escaped the ‘A’ division cell in Lokoja, around 3.21 am and forcibly went through the back door. This is even as the Inspector General of Police, Ibrahim Idris, yesterday, ordered the immediate removal of Kogi State Police Commissioner, Ali Janga, over the escape of the suspects. But Senator Melaye, in a swift response, asked the police to produce the suspects dead or alive and threatened to sue the IGP, if they were not produced. The escape The Police Commissioner, Janga, who disclosed this at a briefing in Lokoja, said both Seidu and Salisu escaped yesterday when they were supposed to be arraigned before a Federal High Court in Lokoja, alongside Melaye and Mohammed Audu, son of the late Abubakar Audu, former governor of the state. He identified Aliyu Isa, Adams Suleiman, Emmanuel Audu and Musa Mohammed as four other suspects that escaped from custody around 3:21 am, yesterday. He said 13 policemen, comprising five operatives of Special Anti-Robbery Squad, SARS, and eight conventional policemen on duty when the incident happened had been detained for interrogation. Janga said the police declared six suspects, including Melaye and Audu, wanted, adding that the police sought the assistance of Interpol in arresting the suspects. He said: “The Nigeria Police Force, Kogi State Police Command today (yesterday), March 28, 2018 received news that six suspected criminal elements, namely Kabiru Seidu a.k.a Osama, Nuhu Salisu a.k.a Small, Aliyu Isa, Adams Suleiman, Emmanuel Audu and Musa Mohammed who were under detention at the ‘A’ Division Lokoja escaped from lawful custody. “Investigation into the unfortunate incident is ongoing, while the 13 police officers who were on duty when the incident occurred were detained for interrogation. “The names of Melaye, Mohammed Audu and six suspects have been sent for watchlisting and red notice by the Interpol for immediate arrest anywhere we see them.” He appealed to the public to assist the police with information on the whereabouts of the suspects by reporting to the nearest police station. IGP orders immediate removal of Kogi CP Expressing his disappointment over the escape, the Inspector-General of Police, Ibrahim Idris, ordered immediate removal of the Commissioner of Police in Kogi State. Similarly, a new Commissioner of Police, CP Esa Sunday Ogbu, who until now, was the Commissioner of Police, Federal Operations, Force Headquarters, Abuja has been directed by the IGP to immediately proceed and take over as the new Commissioner of Police, Kogi State Police Command. Idris’ action, according to a statement by the Force Public Relations Officer, ASPJimoh Moshood, was his dissatisfaction over the circumstances that led to the escape of six suspects. The statement read: “Inspector-General of Police, IGP Ibrahim K. Idris, dissatisfied with the circumstances surrounding the escape of six suspects, including two principal suspects, Kabiru Seidu, aka, Osama, and Nuhu Salisu, aka Small, who indicted Senator Dino Melaye and Mohammed Audu in a case of conspiracy and unlawful possession of prohibited firearm already filed at the Federal High Court, Lokoja which came up in court today (yesterday), March 28, 2018, has ordered the immediate removal of Commissioner of Police, Kogi State Command, CP Ali Janga. “The Commander FSARS in the state, Divisional Police Officer ‘A’ Division, Lokoja and other Police officers implicated in the escape for negligence, dereliction of duty and gross misconduct in the escape of the six suspects have also been transferred out of the state and are facing serious disciplinary action. 13 other Police officers are currently being detained and investigated for their roles in the escape. “CP Esa Sunday Ogbu, Commissioner of Police, Federal Operations, Force Headquarters, Abuja has been directed by the IGP to immediately proceed and take over as the new Commissioner of Police, Kogi State Police Command.” Produce my accusers dead or alive, Melaye tells Police Meanwhile, Senator Dino Melaye, yesterday, threatened to sue Ibrahim Idris, Inspector-General of Police, if he failed to produce two suspects who levelled allegations against him. Speaking on the floor of the Senate, yesterday, Melaye said instead of producing the suspects in court, the prosecutor asked the judge to issue an arrest warrant, stressing that there were rumours that the suspects might have been killed. He, therefore, urged the police to produce them “dead or alive.” Melaye said: “Mr President, we were all supposed to appear before the Lokoja High Court this morning (yesterday). My lawyers were in court at 9 am and the case was called up and the prosecutor of Nigeria police could not produce the two persons. “Instead of producing the two persons, they asked the judge for a bench warrant for an arrest but the judge refused to grant their prayers and the judge said despite the fact that I have not been served I sent representation to the court. And the main accused persons are absent in court “So, she cannot grant a bench warrant and the matter has been adjourned till May 10. Mr President, I want to use the opportunity and on the principle of justice to call on the Inspector-General of Police that within 48 hours he must produce these accused persons because they are presumed innocent until proven guilty; they also have right to life.” “So, police must as a matter of urgency, produce these two accused persons. Failure to do so, I will sue the Inspector-General of Police for mental assault. Nigeria is not a Banana Republic. They cannot escape, he must produce them dead or alive.”