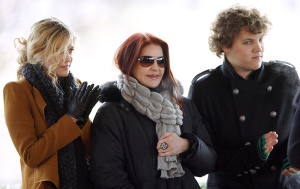 A family in mourning. Priscilla Presley spoke out for the first time since her grandson, Benjamin Keough, died by suicide.

“These are some of the darkest days of my family’s life. The shock of losing Ben has been devastating,” the actress, 75, wrote via Facebook on Wednesday, July 22. “Trying to put all the pieces together of all the possible whys has penetrated my soul. Each day I wake up I pray it will get better.”

Priscilla, who was married to the late Elvis Presley from 1967 to 1973, went on to share how her loved ones have been coping since the tragic loss.

“I think of my daughter and the pain she is going through as she was a doting mother,” the Dallas alum wrote of Lisa Marie Presley. “Ben’s father, Danny, who is completely lost, as Ben was his only son. Riley, so loving and so close to him; Harper and Finley, who absolutely adored Ben. Navarone, who struggles deeply with loss and death. Rest In Peace Ben, you were loved.”

Keough died on July 12 at the age of 27. Two days later, the Los Angeles County Department of Medical Examiner-Coroner told Us Weekly that the cause of death was a self-inflicted, intraoral shotgun wound.

A rep for Lisa Marie, 52, previously told Us that “she is entirely heartbroken, inconsolable and beyond devastated but trying to stay strong for her 11-year-old twins and her oldest daughter, Riley.”

If you or someone you know is in emotional distress or considering suicide, call the National Suicide Prevention Lifeline at 1-800-273-TALK (8255).