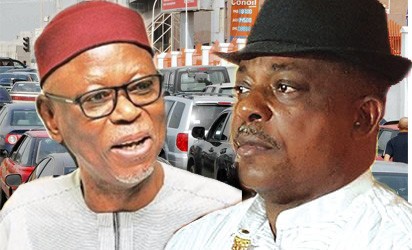 PDP demands proscription of APC Loot for campaign
The Peoples Democratic Party (PDP) has charged the Independent National Electoral Commission (INEC) to immediately proscribe the All Progressives Congress (APC) following the “undisputed revelations that it financed Muhammadu Buhari’s 2015 campaign with looted funds.” John Odigie Oyegun and Prince Uche Secondus The party, in a statement by its National Publicity Secretary, Kola Ologbondiyan, yesterday also gave the Buhari-led presidency a three-day ultimatum to respond to allegations that it was elected with looted funds or find itself top of the list of confirmed looters. The party said instead of the Presidency and the APC to come out with a response on how President Buhari’s 2015 campaign was funded with looted sums, “they are busy hallucinating about names of individuals,” whose matters are before the courts of competent jurisdiction. The statement read: “Now that the APC, the federal government, Alhaji Lai Mohammed and the Buhari Presidency have chosen a loud silence rather than accepting that looted funds were used to install Buhari as President in 2015, we charge INEC to do the needful by commencing the process for the proscription of the APC as a political party. “It is evidently clear that the APC, federal government and the Minister of Information, Alhaji Lai Mohammed, are running away from the issue of how they raised money to install Buhari as President. “They have pressed the panic button and resorted to unfounded allegations against PDP members just to divert the attention of Nigerians and the international community from their atrocious government and its manifold failures of leadership. “The PDP will not join the panicky APC and the federal government in their resort to engage in matters that are subjudice because we believe and respect the Rule of Law, particularly, as it concerns the rights of every citizens. “We know those in the APC and Buhari’s cabinet, who as champions of looting, plundered the resources of their various states and handed same over for the very expensive electioneering campaign of President Buhari, who had earlier confessed of his insolvency. “We have challenged the APC and the Presidency to declare the sources of these funds and how they were used since they have been proven to come from public coffers.”
Share
Facebook
Twitter
WhatsApp
Pinterest
Linkedin
ReddIt
Email
Print
Tumblr
Telegram
Mix
VK
Digg
LINE
Viber
Naver
Previous articleEdo pdp denies leaving N100bn debt for apc
Next articleANN joins Obasanjo, others to campaign against Buhari, 2019