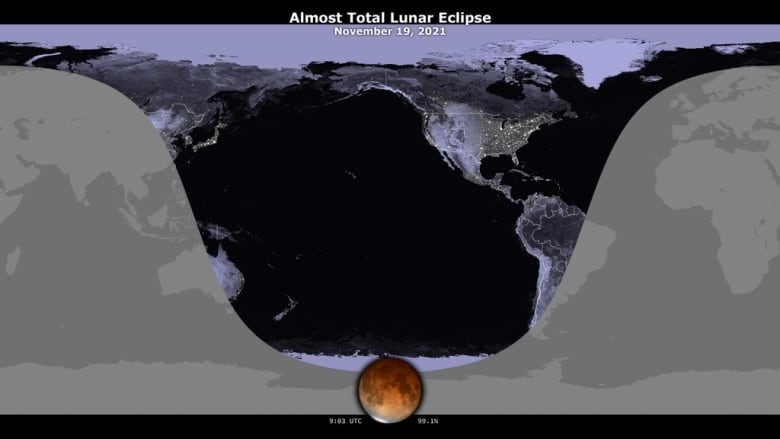 Skygazers are in for a treat overnight between Thursday and Friday, when much of the planet will be able to see the longest partial lunar eclipse in almost 600 years.

The only hitch is that for much of Canada, the peak of the eclipse will take place in the middle of the night.

But if the weather co-operates, it might be worth braving the cold night air for a glimpse of the longest partial lunar eclipse since 1440, when Henry VI was the King of England and the Inca Empire was expanding.

Jan Cami, director of the Hume Cronyn Memorial Observatory at Western University in London, Ont., said the event will last a total of 208.4 minutes, which is quite long for a partial eclipse. He said the partial eclipse on Feb. 18, 1440 lasted 208.8 minutes.

As the moon passes through the Earth’s shadow, it will take on a reddish, coppery hue, cast by the sunlight refracting through our atmosphere.

Movie of the “NEAR TOTAL ECLIPSE.” LONGEST PARTIAL LUNAR ECLIPSE in 580 years occurs on morning of November 19th. 1st parts of the eclipse begin at 1:02AM EST. Max eclipse occurs at 4:02 AM when 97% of MOON in darkest part of Earth’s shadow. <a href=”https://t.co/2HwPpqPbbd”>pic.twitter.com/2HwPpqPbbd</a>

The moon will start to noticeably dim just after 2 a.m. ET on Friday, as it begins to slip into the Earth’s shadow, or umbra.

According to NASA, the peak will occur at about 4 a.m. ET. At its height, it will be very close to a total eclipse — 97 per cent of the moon will be covered by the Earth’s shadow, leaving only a sliver exposed on the left side. By 5:47 a.m. ET, the moon will emerge again.

The peak viewing times across Canada include:

According to Cami, the next time a partial eclipse will last this long will be in 2669.

He explained that the reason this partial eclipse lasts so long is because it’s very close to a total eclipse.

A total eclipse has two partial phases — one before the total phase and one after the total phase. The only time that there is an exceptionally long partial eclipse is when it is near-total.

There’s no need for special equipment to watch the eclipse, but if you want to boost your viewing experience, try using a telephoto lens on a camera, binoculars or a telescope.

“With telescopes, seeing how the shadow creeps over the moon’s surface is quite fascinating,” Cami said.

If it’s cloudy, you can also opt to watch the eclipse live online at the Virtual Telescope Project.

Animation of a total lunar eclipse

This video produced by NASA shows how a lunar eclipse works, as the moon orbits the Earth and enters its shadow. 0:41

Cami said many people aren’t aware that there is actually a connection between the two types of eclipses: A solar eclipse always precedes or follows a lunar eclipse by two weeks.

But the upcoming solar eclipse on Dec. 4 will be visible only in Antarctica.

November’s full moon is sometimes called the Beaver Moon, a reference to the time when beavers finalize winter preparations and take shelter in their lodges for the season, according to the Almanac.