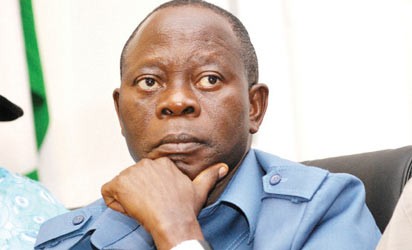 Oyegun, Amaechi absent as South South leaders back Oshiomhole for chairman: APC convention
THE leadership of All Progressives Congress, APC, in the South-South zone, met in Benin City, yesterday, and adopted the immediate past governor of Edo State, Comrade Adams Oshiomhole, as the zone’s choice for the party’s national chairman. Oshiomhole Meanwhile, four out of the six state chairmen of the party in the zone have distanced themselves from the endorsement of Oshiomhole. This came as Edo State Caucus of APC endorsed Oshiomhole for national chairman and urged him to join the race ahead of the forthcoming convention of the party. State chairman of APC, Anslem Ojezua, announced this, Sunday night, after a meeting of the leadership of the party in Edo State, presided over by Governor Godwin Obaseki. Others in attendance included Minister of State for Health, Dr Osagie Ehanire; former governor of the state, Prof.Osarhiemien Osunbor; Deputy Governor of the state, Comrade Philip Shaibu; Deputy Chief Whip of the Senate, Senator Francis Alimekhena; Deputy Chief Whip of the House of Representatives, Pally Iriase; Secretary to the Edo State Government, Osarodion Ogie, and members of the House of Representatives in the state on APC platform. Addressing journalists, Ojezua, who noted that Oshiomhole was the sole candidate of the state for the position, said: “Today Sunday night), we had our state caucus meeting and at the meeting, a motion was put to urge our leader, Comrade Adams Oshiomhole, to put himself forward for the position of national chairman of the APC considering the fact that NEC had graciously approved that the zoning formula earlier put in place be sustained, which makes him eminently qualified.” S-South adoption On the South-South adoption, the meeting, which lasted for over four hours, attracted zonal leaders of the party led by Vice Chairman, South-South, Mr Ntufam Hilliard Eta. Also at the meeting were Comrade Adams Oshiomhole, Chief Timipre Sylva; Senator Magnus Abbe, Alims Agoda, Eseme Eyibio; former Governor of Akwa Ibom State, Chief Sam Ewang; Mrs Miriam Alli, Senator Francis Alimekhena, Frank Ajobena, Chief Great Ogboru, Victor Ochei, Cairo Ojougboh, Senator Domingo Obende; Speaker of Edo State House of Assembly, Kabiru Adjoto; Comrade Frank Kokori and members of the APC caucus from South South in the National Assembly. Oyegun, Amaechi absent But the incumbent National Chairman of APC, Chief Odigie-Oyegun and immediate past governor of Rivers State and Minister of Transportation, Chief Rotimi Amaechi, were absent. However, there was tension in the hall when some supporters of Chief Amaechi, said they were not at the meeting to adopt any candidate, but were shouted down by majority of the leaders from the zone. Though one of the delegates nominated the incumbent National Chairman, Chief John Odigie-Oyegun, but Oshiomhole´s nomination scaled through after a voice vote. Addressing journalists after the meeting, Zonal Vice Chairman of the party, Ntufam Hilliard Eta, said: “You are all aware of the happenings in the party and luckily one of the decisions taken by NEC, was that the positions of the party should be retained in the various jurisdictions occupying those positions as at now. And you are aware that the South-South is occupying the number one position of the party in Nigeria. “It is important that we proceed from the premise of that meeting and begin to discuss and interact on the best ways we can use those resolutions reached at NEC to impact positively on the South-South zone of the party given that the zone is unarguably the fastest growing zone of the party. We also took into consideration the need to put our best forward. “That decision was unanimous, which means every member of the state caucus not just participated but accepted that this must be the position of Edo State.” 4 chairmen dissociate selves from endorsement They are Rivers State APC Chairman, Chief Davies Ikanya; Bayelsa State APC Chairman, Deacon Joseph Fafi; Cross River State APC Chairman, Mr. Etim John, and Akwa Ibom State APC Chairman, Dr. Amadu Attai, as well as APC Deputy National Secretary, Victor Giadom. They had stormed out of the South-South Zonal Caucus meeting at Edo State Government House in protest at what they said were plan by Governor Obaseki and zonal Vice Chairman of the party, Hilliard Eta, to bar Oyegun from standing for re-election in favour of Oshiomhole. “We were here for a meeting only to be ambushed by the national vice chairman of the party to adopt a preconceived candidate,” Ikanya said.
Share
Facebook
Twitter
WhatsApp
Pinterest
Linkedin
ReddIt
Email
Print
Tumblr
Telegram
Mix
VK
Digg
LINE
Viber
Naver
Previous articleI can not be silenced, Dino Melaye says as Police, DSS lay siege to his residence
Next articleRelease me and I’ll turn a pastor, says teenage robber caught with 3 guns