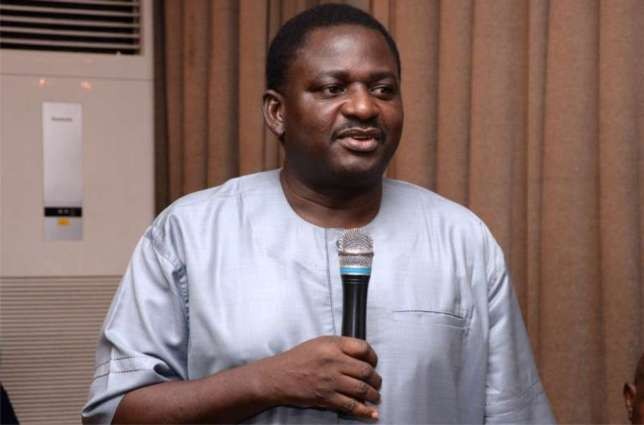 Adesina said those criticising Buhari are on a mission to “demean, de-market, and demonise” him ahead of the 2019 election.

President Muhammadu Buhari‘s Special Adviser on Media and Publicity, Mr. Femi Adesina, has slammed those criticising the President’s recent comments about the influx of herdsmen in the country.

Buhari had on Wednesday, April 11, in London said that the killer herdsmen in the country are not Nigerians but militias trained by the late Muammar Gaddafi of Libya.

He said the armed men fled to other African countries, including Nigeria after Gaddafi was killed.

Some Nigerians, especially opposition politicians, have since the statement criticised the President for blaming Gaddafi for Nigeria’s security failure.

On Thursday, April 13, a PDP senator from Abia State, Enyinnaya Abaribe, caused a rowdy session in the Senate when he described Buhari as “incompetent” in his handling of clashes between farmers and herdsmen.

In a motion raised at plenary,  Abaribe said the President was incapable of protecting Nigeria from foreign invasion.

He had said, “Yesterday (Wednesday) in London, the President and Commander-in-Chief of the Armed Forces of Nigeria said the killings are as a result of the people who were trained by the late Gaddafi, and so implying that these people doing these killings in Nigeria are from outside the country.

“When a commander-in-chief cannot take care of invaders invading Nigeria, why is he still a commander-in-chief? Why do we continue to indulge this president (such) that everywhere he goes, he tells everyone outside this country that he is totally incompetent? Because it is obvious…”

Responding to the criticisms in a piece titled ‘Who Will Save Some Nigerians From Intellectual Laziness?’, Adesina said Buhari’s statement was misinterpreted.

He said those criticising the President are on a mission to “demean, de-market, and demonise” him ahead of the 2019 general elections.

“The tendency now is to twist and slant every word from President Buhari in the negative, all in a bid to demean, de-market, and demonise him, and make him unattractive to the electorate. But those who do it are to be pitied”, Adesina said.

The presidential aide, however, boasted that despite the array of criticisms, Nigerians would re-elect Buhari in 2019.

He said in the end, critics will be holding the short ends of the stick, and looking small.

Since President Muhammadu Buhari met with the Archbishop of Canterbury in London on Wednesday, and spoke on the likely impact of gunmen trained by former Libyan leader, Muammar Gaddafi, on the killings by herdsmen in Nigeria, some people have virtually flown off the handle, ululating as if wailing was going out of fashion.

They twisted the meaning of Mr President’s words (yes, some people twist everything, even the words of God; 2 Peter:3, 15,16). They claimed he was blaming Gaddafi, long dead, for the killings in Nigeria.

But let’s see the vacuousness and intellectual laziness in the twist they have given what President Buhari said, out of sheer malice and evil hearts. Sadly, even a Senator was involved in the sickening display of poisonous heart. That’s what you get when small minds get into high places.

“The problem is even older than us,” said President Buhari. If anybody is not challenged with simple understanding of English language, does this mean pre-Gaddafi? The former Libyan leader was born in 1942, and killed in October 2011, making him 69 years old at the time of his death. So, did he cause clashes between farmers and herdsmen, which the President said was older than most living Nigerians? Only rabidly mischievous minds can conceive such.

“It has always been there, but now made worse…” If you say something has been exacerbated by a factor, does it mean such factor is the cause? Simply illogical.

The President talked about the influx of militia trained, armed and used by Gaddafi, who now dispersed into different countries, including possibly Nigeria, after the Libyan strongman’s death. Are some people claiming ignorance of such development, despite it being global knowledge? So deep must be the ignorance of such people. Simple research will show them the Libyan influence on proliferation of small arms all over Africa, after Gaddafi’s death.

The President then talked about the herdsmen we used to know, who carried just sticks, and at worst a cutlass, saying those armed with sophisticated weapons were unknown to this clime. Is that not true?

If herdsmen have suddenly turned murderous in a country, it calls for all sorts of interrogation, including intellectual, as to what may have gone wrong. The causes could be multifarious. And solutions must be jointly proffered.

A President has sensitive security reports available to him. President Buhari gave another vista from which the herdsmen/farmers clashes could be considered, but rather than be reflective and do critical interrogation, the wailers engaged in their pastime: they began to wail, including senators and people who should naturally be level-headed and examine issues dispassionately. Very sorry.

“But we are working on solutions,” President Buhari told the cleric. They ignored that. It holds no meaning for them. They are interested in problems, not solutions. Problems serve their pernicious interests more. Pity!

That is what hatred does to the heart. It stunts the mind and poisons the soul. Such heart plays petty partisan and divisive politics with every matter. It is what President Buhari at that meeting called “irresponsible politics.” And as we head for general elections next year, much more of it would be seen, except such people reform, and put on their thinking caps.

The tendency now is to twist and slant every word from President Buhari in the negative, all in a bid to demean, de-market, and demonize him, and make him unattractive to the electorate. But those who do it are to be pitied.

Sensible Nigerians know what the President is doing for the country, and would queue behind him at the polls next year. At the end of it all, the detractors would be holding the short ends of the stick, and looking small, forlorn and disconsolate. Where would they then hide their faces?