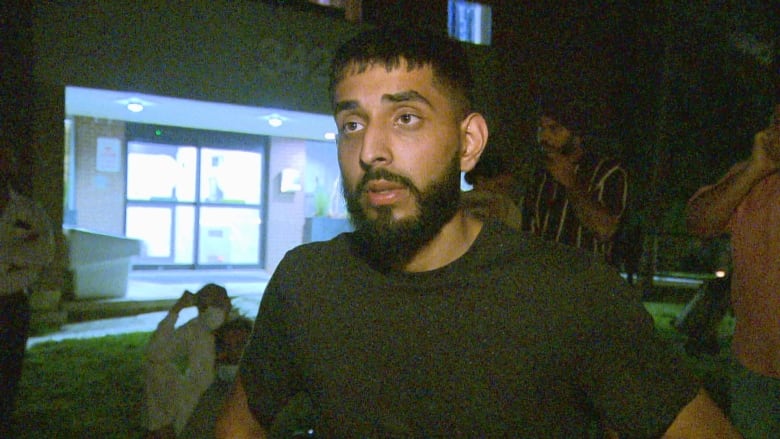 The province’s police watchdog is investigating the death of a 62-year-old man who was shot by a Peel Region police officer in Mississauga on Saturday evening.

In a statement released on Sunday, the Special Investigations Unit (SIU) said that officers were called to an apartment unit at 3425 Morning Star Dr., near Goreway Drive, at about 5 p.m. to “check on the well-being of a man.”

Peel police Const. Sarah Patten said the initial call reported that the man was suffering from a medical condition and not taking his medication.

Patten said the man, who was alone in the unit, was in a “state of crisis” and believed to have weapons on him in his residence.

Muhammed Choudry said the victim was his uncle and he suffered from schizophrenia and other illnesses.

“He was a harmless man,” he said, adding that his uncle was “not a threat.”

A video taken by a bystander on Saturday night, which was posted by Mississauga Imam Ibrahim Hindy on Twitter, shows tactical units entering the second-floor unit through the balcony.

Three officers are seen kicking open the door and yelling into the residence.

A series of gunshots can be heard before all three officers enter the apartment.

WARNING: This video contains graphic content that some viewers may find disturbing.

Video taken by a bystander shows tactical officers responding to a call at an apartment building on Morning Star Drive on Saturday. Later a man was killed. (Ibrahim Hindy/Twitter) 0:16

The SIU release said that uniform and tactical officers, as well as officers with the force’s K9 unit, responded to the incident and communicated with the man, who had barricaded himself inside the residence.

“The state of crisis that he was in and the belief that he had access to weapons, yes, we believe that he was a danger to himself,” Patten told reporters Saturday night.

Due to his “extensive medical history” and lack of communication for almost 15 minutes, she said, officers made the decision to enter the residence “to check on his well-being.”

Once police entered the apartment unit, “an interaction occurred which included officers deploying a conducted energy weapon at the man, as well as firing plastic projectiles from an Anti-Riot Weapon ENfield,” the SIU release said.

“When these had no effect, an officer discharged a firearm and the man was struck.”

He died at the scene shortly after.

Family and community members spoke to reporters outside the residence Sunday afternoon, recalling the events leading up to the shooting a day earlier.

Hassan Choudhary, the victim’s nephew, said his uncle was “harmless.”

“He could barely take three, four steps,” he said.

“You’re telling me a 62-year-old man … who can barely breathe to begin with is going to run and attack you?”

The victim’s eldest daughter initially called a non-emergency ambulance on Saturday evening because her father was having an “episode,” according to Khizar Shahzad, who is also a nephew of the victim.

Once paramedics arrived, they saw that the victim had a knife and called police, Shahzad said.

When officers arrived, all other family members were removed from the unit, he said, at which point the victim’s daughter called for her father from outside the unit.

The victim went to the door, saw officers coming toward him and shut himself back inside the unit, Shahzad said.

Shahzad, who arrived at the building at about 7 p.m., said he informed the supervising officer of the severity of his uncle’s condition and explained the situation.

The victim’s brother, Rafaquat Ali Choudry, along with nephew Muhammed Choudry, pleaded with police to let a family member go up to the unit to speak with the man.

Rafaquat said his brother didn’t speak any English and was afraid of police — his condition made him paranoid.

Muhammed said he’s grown up knowing his uncle’s medical condition, having dealt with situations like this before.

“Because we’ve done this before where he listens. He listens to us.”

At this point, Shahzad said officers were trying to break the door open, while he was begging them not to hurt his uncle.

“He’s so frail that even a tackle I was afraid was going to kill him,” he said.

As that was going on, Shahzad said officers came in from the balcony and shot his uncle.

Hassan Choudhary said the family wasn’t aware that the victim had died until they saw video of the shooting that had surfaced online.

“Everything that happened yesterday, it really shows you who’s here to protect and serve you — there is no one,” he said.

Rallies were held in the area of the incident throughout the day Sunday, and into the evening.

Victim was a husband, father of 4

Muhammed said his uncle, who has been identified by family members as Ejaz Ahmed Choudry, leaves behind his wife and four children, the youngest being seven years old.

Ejaz, from Pakistan, was the eldest brother of five children.

Abdul Mulla, who lived on the same floor as Ejaz, was there when the incident occurred.

He was told by police to stay inside his own unit, where he said he heard bangs from the neighbouring residence.

Mulla said Ejaz was a nice person, adding that he was “no trouble to anyone.”

“He was a very nice guy,” he said. “Everybody respected him.”

Knife recovered at the scene: SIU

In a news release issued Sunday afternoon, the SIU said its investigators have completed a canvass of the area in an attempt to locate evidence, and they recovered a knife from the scene.

The SIU said several witnesses have been interviewed, and investigators are in possession of video footage.

A post-mortem examination will be conducted on Monday, according to the release.

“The SIU is working diligently to ensure the investigation is concluded, and its findings released, as expeditiously as possible,” it reads.

“Until such time, we ask for the public’s continued patience, and to avoid making any premature conclusions.”

Mississauga Mayor Bonnie Crombie sent out her condolences Sunday afternoon, saying in a tweet that her “heart goes out to his family.”

She also asked the SIU to act quickly, saying the Peel Regional Police budget for next year will be “reviewed through a different lens.”

“Our goal is to support the vulnerable and ensure these incidents never happen again,” Crombie said in the tweet.

It’s very sad when a life is lost in our community. My heart goes out to his family. I ask the SIU to act quickly. Our goal is to support the vulnerable and ensure these incidents never happen again. The 2021 <a href=”https://twitter.com/PeelPolice?ref_src=twsrc%5Etfw”>@PeelPolice</a> budget will be reviewed through a different lens.

In a release issued Sunday, the Muslim Council of Peel called for an immediate review of the use of force by police, particularly during mental-health calls.

The council also wants race-based demographic data on police shootings to be made public.

“A disproportionate number of racialized individuals including Black, Indigenous and Muslim are the victims of police shootings across Canada and right here in Peel Region,” the release said.

The council is also demanding an independent public inquiry in the case of Ejaz.

“Given the video evidence and the testimony of family members, Peel police’s conduct in this matter was clearly excessive and requires nothing short of an independent inquiry unconnected to the SIU,” imam Ibrahim Hindy, the council’s acting president, said in the release.

The family told reporters Sunday that they are also calling for a public inquiry into Ejaz’s death.

Family says they want a public inquiry into his death. After they spoke they chanted “Justice for Ejaz” and no justice, no peace. <a href=”https://t.co/UA78FsXkZo”>pic.twitter.com/UA78FsXkZo</a>

The SIU investigates cases involving police where there has been a death, serious injury or allegations of sexual assault.

Anyone with information or who has witness video is asked to contact the lead investigator at 1-800-787-8529.