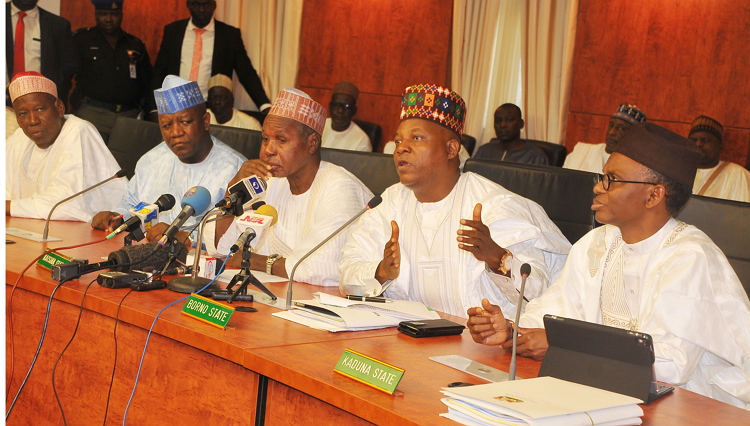 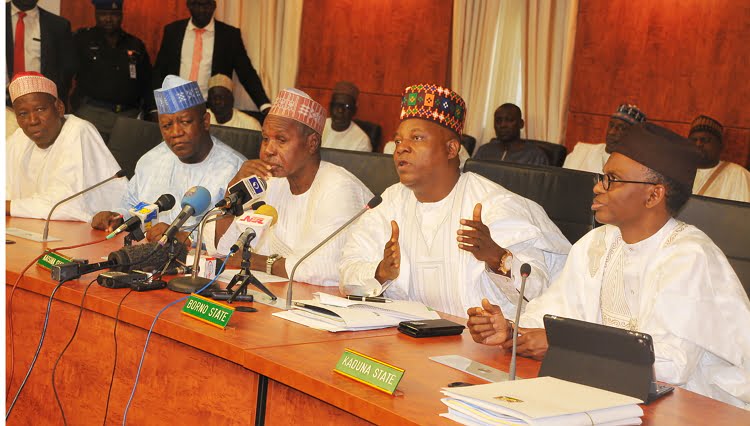 Governors of the 19 Northern states have appealed to the federal government to strategize and come up with measures that could permanently deal with the issue of insecurity in the region.

Speaking at the Northern States Governors’ Forum in Kaduna on Friday, its chairman and governor of Borno state, Kashim Shettima said, “We appeal to the Federal Government to restrategize and come up with measures that could deal with the situation more permanently.”

The forum thanked President Buhari for his quick and immediate response to issues of insecurity in the region which of recent, seems to be deteriorating.

Shettima explained that the forum has introduced and implemented quite a number of measures to stem the tide of security challenges in the region.

“The steps taken by the federal government are quite commendable. I would like to, therefore, express our gratitude to President Muhammadu Buhari for his quick and immediate response to the issues of insecurity in the region,” he noted.

The Governor expressed appreciation and gratitude to governors in the region for the considerable support and cooperation they have given to him in the last four years as the Chairman of the forum.

He explained, “Within this period, we have been able to collectively make some modest achievements in various sectors, which are deliberately initiated and implemented for the overall growth and development of the Northern region and to some extent, Nigeria as a whole.

“This being my last meeting, both as a Chairman and member of the forum, in the face of the increasing security challenges, especially emergent criminal activities such as kidnapping, cattle rustling, incessant communal clashes, inciting religious preachings and suicide bombings among others, most of which were not properly codified in the criminal justice system of Northern Nigeria, we found it judicially imperative to incorporate such criminal offences into the penal code.

“The Forum, therefore, established a committee of Attorneys-General of the 19 Northern States to critically examine the provisions of the criminal justice system vis-à-vis, the emergent criminal activities, with a view to ensuring that perpetrators of such criminal offences are brought to justice.

“Accordingly, the forum advised all State Houses of Assembly in the 19 Northern States to make amendments and modifications to the existing criminal justice system.

“Sequel to persistent reports of drug abuse especially among the youths and women in the Northern States, the Forum initiated the move to fight the menace in a holistic and all-encompassing manner, by setting up committees of relevant stakeholders in each State of the region, towards ensuring eliminating the scourge of drug abuse. At the National level, the Forum made a passionate appeal to the Federal Government to frontally deal with the issue of drug abuse and possibly declare a state of emergency in the fight against the scourge.”

Shettima thanked the Federal Government for heeding the call on the issue of drug abuse which culminated in the setting up of the Marwa committee against drug abuse.

“I would, at this juncture, extend the Forum’s appreciation to the Managing Director of the Nigerian Ports Authority (NPA), Hajiya Hadiza Bala Usman, and Dr. Vincent, a professional psychiatrist for drawing the attention of the Forum to the problems associated with drug abuse and making invaluable and implementable recommendations on the way forward.

“The Forum, in a bid to attain some degree of financial independence, resolved to create a joint financial institution, which could serve as a vehicle for the region’s economic recovery and overall sectoral development. In pursuance of this objective, each state is to contribute N50 million monthly, for a period of six months. So far, we have N650 million out of the expected N5.7 billion.

“I am therefore calling on states that are yet to fulfil their pledge, to do so, in order to enable us embark on the implementation of the various programmes and projects articulated under the scheme. This include the establishment of a renewable energy plant, capable of generating 3000 – 4000MW of electricity.

“The forum has also been able to make pragmatic initiatives towards the resuscitation of the New Nigeria Development Company in ortder to restore its position as the business and economic live-wire of the region.

“To this end, about six billion naira was approved by the Forum for the implementation of a five-year strategic development plan, which if properly executed would undoubtedly propel the region into economic prosperity. In addition, a new commodity marketing company was established, as a subsidiary of the NNDC, to develop and promote agricultural activities in the region. In order to further consolidate the economic base of the region, the NNDC had signed a memorandum of understanding with Savanna Petroleum Limited for the development of four oil blocks.
“Additionally, the NNDC has commenced negotiations with the Department of Petroleum Resources (DPR) to venture into oil and gas exploration in the Northern region. Plans are also underway to resuscitate the Kaduna Textiles Company into full production of textile materials, which hopefully, would among other things, meet the uniform needs of our Armed Forces and other para-military agencies.

“The Forum has also been able to resolve the misunderstanding between pensioners and the management of the New Nigeria Newspapers, to the extent that the process has began for the payment of the entitlements of pensions this is part of the Forum’s strategic plan to reinvigorate the New Nigeria Newspapers towards making it an economically viable and professionally competitive in line with international best practice.

“Here, I would like to profoundly thank His Excellency, the Executive Governor of Kaduna State, Mal. Nasir El-Rufai who personally took it upon himself to ensure that the pensioners of the company were duly paid their entitlements,” he explained.

He noted that the forum, having realised the role of traditional rulers in the overall scheme of things, for the first time in its history, invited chairmen of the various councils of traditional rulers in the 19 Northern states, to its meetings in order to tap from their invaluable resources towards propounding solutions to the various challenges facing northern states and the nation in general.