No changing clocks in Yukon this weekend, as territory scraps seasonal time change 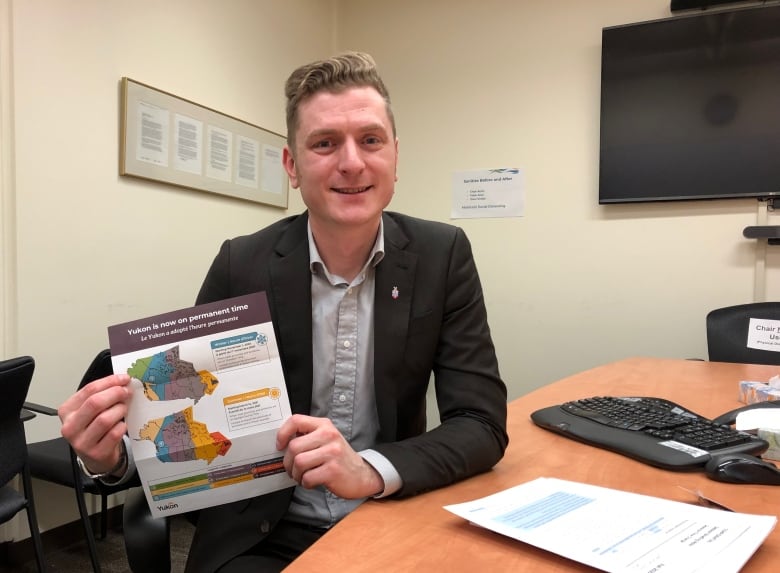 Most of Canada is turning back the clocks this weekend — but Yukon is ticking forward.

That means the territory will have an hour more daylight in the evening this winter, with a later sunrise.

“Yukoners are ready to not deal with the headache of the circadian rhythms being all messed up,” said Premier Sandy Silver earlier this week.

Government analyst Andrew Smith hopes the rest of Canada will consider following Yukon’s lead — and come to the territory for advice on how to make the switch.

While Saskatchewan has been on permanent central standard time for decades, Smith says Yukon is the first large region in Canada to scrap time changes during the digital age.

“There was no manual or checklist we could find to help us do this,” said Smith, who was in charge of preparations.

Yukoners could see some technology issues after Sunday.

The government is warning about an issue with digital calendars. Events that were scheduled before November 1 may show up an hour later then intended.

“This has the potential for confusion with business meetings and personal appointments,” said a government statement.

Smith said he will be staying up all night on Saturday to make sure clocks don’t automatically change.

Yukoners will also have to think about their temporal relationship to other regions when scheduling Zoom meetings or phone calls — particularly with southern neighbour British Columbia, with which the territory had long shared a time zone.

Yukon had planned to stop time changes in coordination with B.C.

However, B.C. opted not to ditch time changes this year. Premier John Horgan has previously said he wanted to coordinate with western U.S. states, which are not changing this year.

Yukon Premier Silver said he wanted to push forward solo, however, because a large majority of Yukoners supported the idea in a survey earlier this year.

“We also believe that B.C. is poised and ready to go as well,” said Silver.

“I would expect that to happen very soon, for them to join us in not changing the clocks.”

This means the territory  will be an hour ahead of most of B.C., including Atlin, a community that is only accessible through Yukon.

The territory now shares a time zone with Alberta, N.W.T. and northeastern B.C. during the winter months.

Local airline Air North has had to redo its flight schedules to Vancouver.

On the streets of Whitehorse, people expressed support.

“I think it’s wonderful and it is long overdue,” said Karen Shearer, who said she likes having more light in the evening.

Vijee Ramachandran previously lived in Saskatchewan, and said living without a time change is “hassle free.”

As a self-described morning person, Brittney Potvin said she would prefer light in the morning. But with Yukon winters generally dark, Potvin said it won’t really affect her.

“We’re hoping people will grab onto Yukon time zone as part of that greater concept of being ‘on Yukon Time,’ which used to be about being a bit more relaxed, doing things at your own pace,” he said.

“But now we actually have our own time zone and we’re proud of that.”