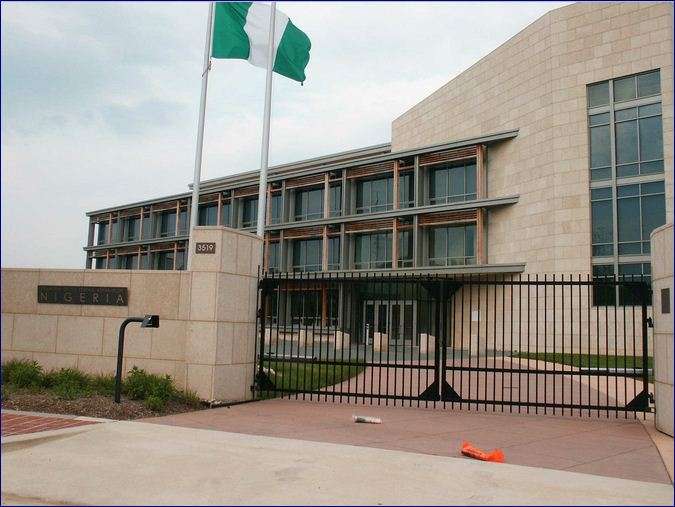 The sorry state of almost 130 Nigerian Embassies and Missions across the world were laid bare before the Senate committee on Foreign Affairs, Wednesday.

This development followed the 2019 budget defence session of the Federal Ministry of Foreign Affairs.

Most worrisome of the level of dilapidation affecting the embassies was said to be inadequate funding over the years.

Others were said to include stinking conveniences in Moscow and Russia as a result of non-functional flusher.

Suleiman explained that the N4.123billion capital votes proposed for the 110 missions abroad, is a far cry from N11.333billion earmarked in 2018 , signifying reduction of N7.209bn or 64 percent.

In his words, “As a result of this, only 30 missions could be considered out of 110 missions for purchase of representational car, renovation/completion of ongoing projects.

“Distinguished Senators, on a general note, it is pertinent to mention that the Capital Budget proposal for the Ministry is grossly inadequate to cater for the line items .

“It is imperative to state that the budget ceiling brought down the capital budget from the 2018 Appropriation level of N20.198bn to N7.618bn representing a 62% reduction.

“This will affect the operation of capital projects, postings and return entitlement of Ambassadors and officers , UNGA, AU and contribution to International Organisation etc, for the year 2019”, he lamented .

In response, members of the committee headed by Senator Monsurat Sunmonu ( ADC Oyo Central), wondered why the ministry in spite of sorry state of Nigerian missions abroad, came up with meagre budgetary proposals for 2019.

Specifically, the Vice Chairman of the Committee, Senator Shehu Sani (PRP Kaduna Central) in his remarks accused the federal government of not showing any seriousness in the running of the Nation’s embassies abroad over the years.

He said: “Year in, year out based on budgetary proposals and poor implementations, the government at the centre has not been serious about her responsibility as a country.

“No responsible Nation that has clear cut development- driven and visionary foreign policy , will deliberately underfund her foreign missions.

“For the past four years this committee has been over sighting this ministry in terms of budgetary appropriations and other assistance, no significance progress can be said to have been made.

“Most of our missions are in sorry state by not being able to pay their electricity or water bills and even the Nation’s diplomats too , in a state of hunger and indebtedness based on information gathered or practical experience witnessed.

“Many of the so called diplomats cannot pay their children school fees particularly in Brussels (Belgium) and the worst of it is the toilet of the Nigerian embassy in Moscow, Russia that is stinking due to non functionality of its flusher, embarrassingly making anybody that uses it to flush it with bucket of water fetched from adjoining embassy.

“It is saddening that from all indications and based on budgetary proposals tabled before this committee, government is not making any serious attempt in tackling the global ridicule that far smaller countries like Cuba , Jamaica etc, are not facing”.

But the Permanent Secretary quickly responded by disclosing that a committee had already been set up by the Presidency to tackle all the raised embarrassing issues.

“All the issues raised are being critically addressed by a special committee set up for that purpose by the presidency. There will be lifeline for both the Ministry and the missions at the end of the day”. He said.