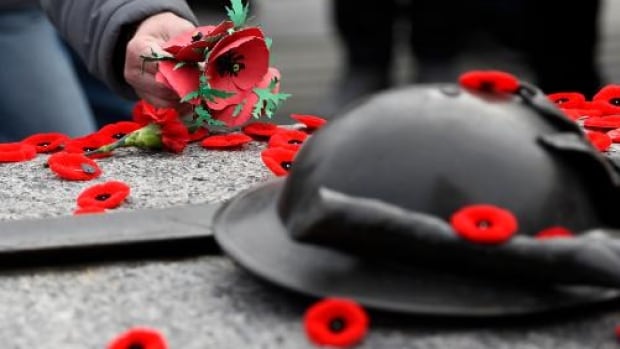 While this year’s national Remembrance Day ceremony at the war memorial in Ottawa will not feature the prime minister, a full morning of programming honouring those who have served in Canada’s military will unfold in the capital today.

CBC News will be marking Remembrance Day on Friday with special coverage from Ottawa, starting at 10 a.m. ET. Find all the details here.

Greff’s son, Master Cpl. Byron Greff, was the last Canadian soldier to die in Afghanistan. He was killed on Oct. 29, 2011 when a suicide bomber detonated an explosive-filled car near the armoured NATO bus in which he was travelling.

“I am honoured to represent those who know what it feels like to lose a child, the pain, the daily struggle, but you do it for your child,” Greff said in a media statement.

Candy told the Royal Canadian Legion that she hopes that she can inspire young people to remember what many Canadian families lost in Afghanistan.

“I hope that more kids will come to realize the meaning of the ultimate sacrifice,” she said.

The ceremony will feature the anthem God Save the King for the first time since the Queen’s death. It also will include a special flypast of vintage military aircraft over Parliament Hill, with each aircraft painted to honour a Canadian veteran.

The vintage planes participating in the flypast will include:

“Each of these planes played a significant role supporting troops on the ground during the Second World War, including the ill-fated 1942 raid on the heavily defended French port [at Dieppe],” the Royal Canadian Legion said in a media statement.

This year marks the 80th anniversary of the Dieppe raid, a battle that claimed the lives of more than 900 Canadian soldiers. It’s often described as the Canadian military’s bloodiest day of the war.

To mark the anniversary, a glass case will be placed at the foot of the Tomb of the Unknown Soldier in Ottawa containing a Red Ensign flag recovered from the beach at Dieppe in 1942 by an American soldier. It was kept by his family for decades before it was donated recently to the Royal Canadian Legion.

The flag was 70 years old when it appeared on the battlefield. No one knows for certain how it got to Dieppe.

Join Matt Galloway and World Report‘s Marcia Young as they host the Remembrance Day ceremony from the National War Memorial in the nation’s capital, beginning at 10:55 a.m., 11:55 a.m. Atlantic and 12:25 p.m. in Newfoundland.

Coverage will include a moment of silence and the laying of a wreath by this year’s Silver Cross Mother — who speaks with The Current‘s Galloway about her son.

You can catch Barton’s coverage on CBC Gem or on the CBC News app. CBC.ca will livestream the events and have regular updates to the online coverage.