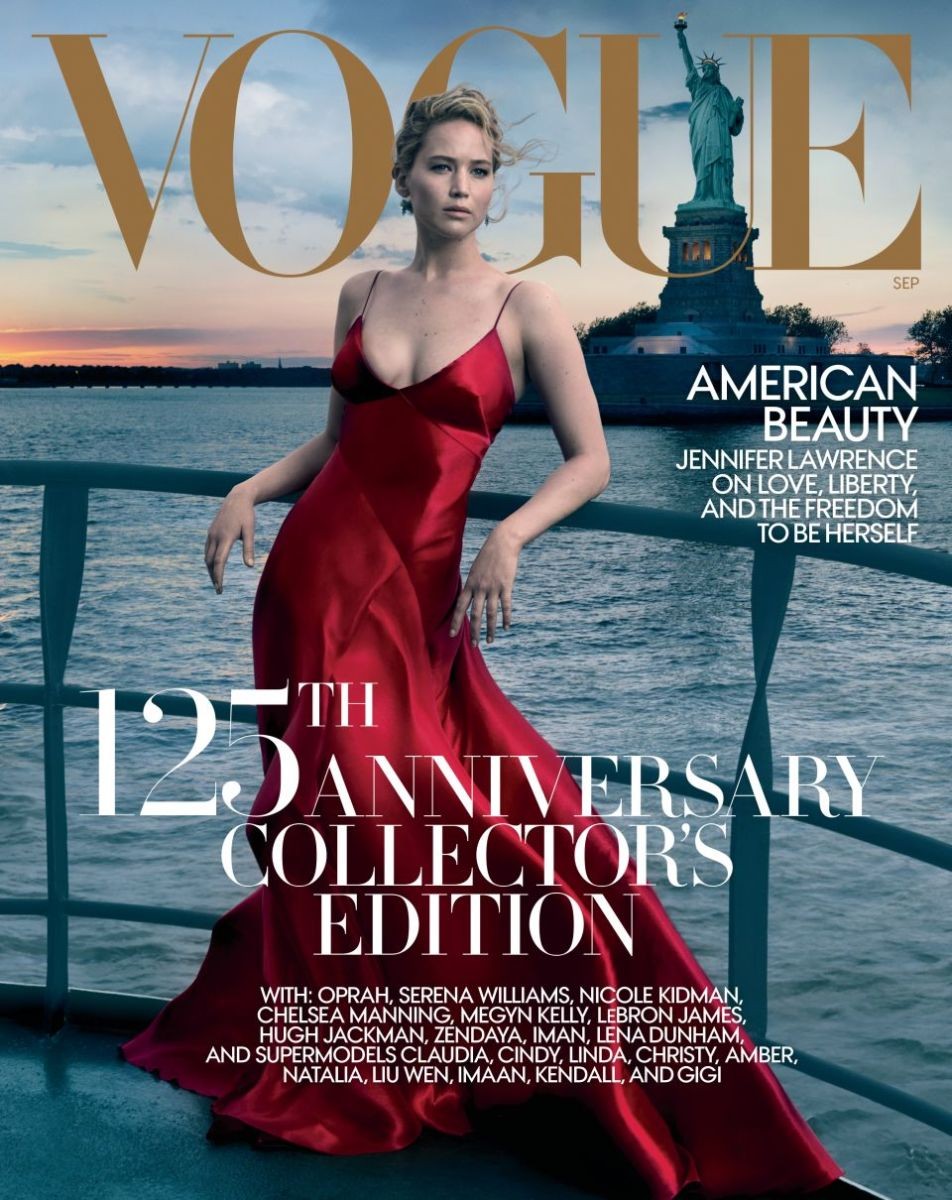 Vogue‘s September cover sparks debate on symbolism of the Statue of Liberty
Earlier this week, Vogue released its highly anticipated September issue, which stars Jennifer Lawrence on four different covers. The primary cover — shot by Annie Leibovitz — captures the actress in a red, satin Ralph Lauren gown staring intently away from the Statue of Liberty. For some, the image is a toast to patriotism, but for Breitbart’s finance and economics editor John Carney, the image is a left-wing media attack on the ongoing immigration debate. Carney caused a firestorm when he posted a picture of the cover on Twitter, captioned with a reference to a recent CNN debate about the symbolism of the Statue of Liberty. {Jezebel}

Ugg collaborates with Jeremy Scott
Your tried-and-true, mid-calf-grazing furry boot will get a Jeremy Scott-inspired update this fall. The pop culture-obsessed designer is teaming up with Ugg to create eight limited-edition styles set to debut Sept. 13. The collaboration is a no-brainer for Scott, who admitted to WWD that he is “an undercover Ugg fan.” Scott will publicize his love for the furry foot fixtures by decorating them with his signature hot rod flames and by encrusting a black pair with crystals. {WWD}

The Ivanka Trump brand is opening first store in Trump TowerBack in February, Nordstrom and several other retailers announced they would no longer sell Ivanka Trump‘s label. Although Nordstrom claimed the decision to drop the brand was based solely on its poor sales performance, many customers perceived it as a political statement against Trump and his administration. Now, the eldest First Daughter’s lifestyle brand has decided to put down its first brick-and-mortar retail roots in New York City’s Trump Tower. {Business Insider}

LA is undergoing a streetwear retail revolution
Los Angeles birthed its own streetwear scene with iconic brands like Stüssy, Fuct and Undefeated. But more recently, a new crop of tastemakers has entered the SoCal streetwear retail landscape — like Jerry Lorenzo’s Fear of God, Stampd, Enfants Riches Déprimés and Rhude — all generating buzz and competing in an ongoing battle for relevancy amongst the established and new. {Hypebeast}

Nordstrom sales growth exceeds expectations, surprises investorsOn Friday, Seattle-based upscale department store Nordstrom posted its second-quarter earnings and, like those reported by fellow department retailer Macy’s earlier this week, they turned out to be pleasantly surprising. Nordstrom announced a 1.7 percent sales growth this period, which exceeds the 0.5 percent that was predicted by its investors on Wall Street. This is especially good news for the Nordstrom family, who have reportedly been angling to regain full control of the Nordstrom Inc. retail corporation they founded. {Fashionista inbox}

Confessions of a fashion editor
Fashion publishing is in a state of change as more and more consumers engage in content from a five-inch screen. And while print editors still lend their editorial eye to conceptualize shoots, the newer breed of digital editors is forced to churn out shopping stories and bite-size news blurbs that blur the lines between editorial and sponsored content. In their “Confessions” series, Glossy spoke to a seasoned fashion editor who has worked for both traditional magazines and newer online publications about the constant stream of press previews, the “ass-kissing festivals” and whether the endless gift-giving inspires content. {Glossy}

Candice Swanepoel talks wellness with The CutVictoria’s Secret vet Candice Swanepoel is the face of Juicy Couture‘s new scent, “Viva La Juicy Glace,” and she’s also a new mom. To celebrate these milestones, the South African model sat down with The Cut to discuss her wellness routine, which includes a breakfast rich in antioxidants, a serious commitment to moisturizing, night workouts and ditching coffee for decaf tea or hot chocolate. {The Cut}