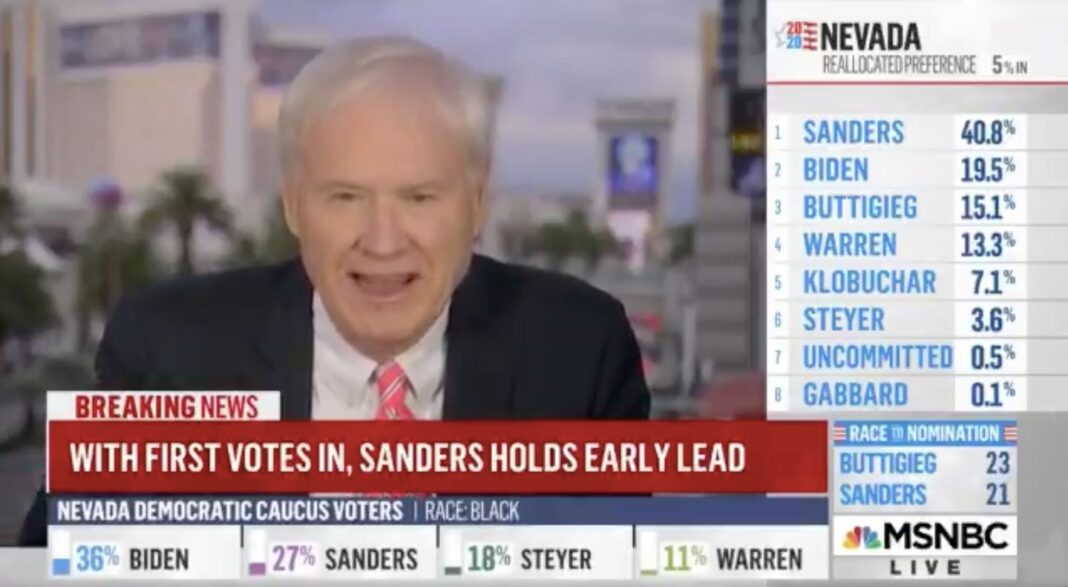 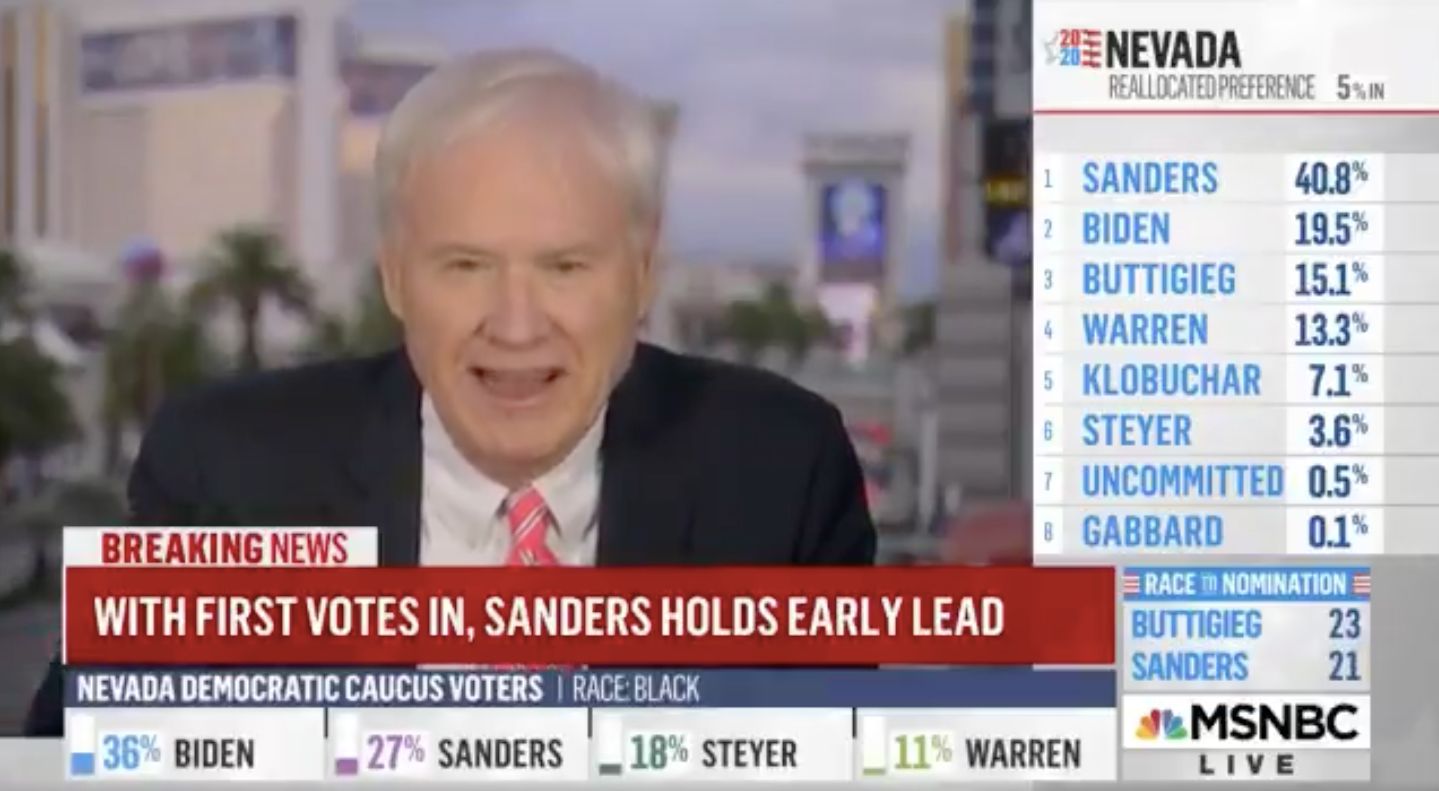 MSNBC’s Chris Matthews Compares Bernie Sanders Winning To The Nazis Taking France, Cable news has been incredulous that Sen. Bernie Sanders (I-Vt.) could actually be the Democratic nominee for president, twisting itself into knots to convince itself that it’s not so.

On Saturday, as results rolled in showing that Sanders was winning the Nevada caucuses, there were horrified reactions and doomsday warnings about Sanders getting the nomination.

The most jaw-dropping came from MSNBC host Chris Matthews, who said he was reading about the fall of France to the Nazis in 1940, and it reminded him of what was going on with Sanders appearing more likely to win the nomination.

He mentioned he had been reading about the fall of France in 1940 and about a call to British Prime Minister Winston Churchill relaying that “It’s over” for France.

“And Churchill says, ‘How can it be? You got the greatest army in Europe. How could it be over?’ He said, ‘It’s over.’ So I had that suppressed feeling,” Matthews said.

MSNBC’s Chris Matthews likens Sanders victory in Nevada to Nazi Germany overrunning France in 1940: “It’s too late to stop him … it’s over” pic.twitter.com/6GJetLoDkq

Sanders’ spokesman Mike Casca tweeted after the segment that he “never thought part of my job would be pleading with a national news network to stop likening the campaign of a jewish presidential candidate whose family was wiped out by the nazis to the third reich. but here we are.”

After Sanders’ strong showing in the Iowa caucuses, Matthews also expressed his skepticism of socialists, wondering whether Sanders would like to see people executed in Central Park.

Matthews faced swift backlash for his remarks on Saturday, with some viewers calling for his resignation or urging MSNBC to fire him.

“Chris Matthews has been generous to me a number of occasions, even blurbing my book,” filmmaker Arun Chaudhary tweeted. “However, his constant references to political violence and today Nazism to describe Bernie Sanders campaign is beyond the pale.”

Chris Mathews has been generous to me on a number of occasions, even blurbing my book. However, his constant references to political violence and today Nazism to describe Bernie Sanders campaign is beyond the pale. @HardballChris must resign or be fired from @MSNBC.

MSNBC did not immediately respond to HuffPost’s request for comment.

In a similar vein, during the New Hampshire primary ― which Sanders also won ― MSNBC host Chuck Todd read an article asking whether Sanders supporters were akin to Nazis.

On Saturday, MSNBC had a 10-minute interview with Democratic strategist James Carville, who was most known for his work with Bill Clinton in the 1990s. He was most recently a supporter of Sen. Michael Bennet (D-Colo.), who dropped out of the presidential race this month after failing to gain any significant momentum.

Carville spent a good chunk of his interview attacking Sanders ― and then, at the end of the interview, said the candidates should stop “attacking each other” and talk more about how to push the country forward. That conversation is actually already happening, with debates about health care, student debt and other issues.

He implied that voters are picking Sanders because they are ignorant, and exhorted the media to better inform the public of the “risks” of making Sanders the nominee.

“I don’t know if us in the media are sufficiently telling people what are the risks that you’re running by doing this,” Carville said, referring to doubts that Sanders could beat President Donald Trump in November. “I think voters need to really be appraised of what’s going on here.”

“The entire theory that by expanding the electorate and increasing turnout you can win an election is the equivalent of climate denial. When people say that, they’re as stupid to political scientists as a climate denier is to an atmospheric scientist … Politically, you’re a fool. That’s a fact,” he added.

James Carville and Nicole Wallace pushing Russia attacks on Sanders on MSNBC, claiming that Putin is the “happiest person in the world now,” trying to help get Sanders the nomination because electability and tying it to Tad Devine & 2016, “this thing just didn’t start right now.” pic.twitter.com/fVd89GyeDl

“The Sanders campaign and the Trump campaign ― they’ve taken these things to the dark arts of bullying the press, abusing the press,” said host Nicole Wallace, who served in President George W. Bush’s administration.

The panel for the Carville interview was Wallace, host Brian Williams and former Sen. Claire McCaskill (D-Mo.) ― not a single progressive.

MSNBC contributor Jason Johnson also came under fire for appearing on a SiriusXM radio show and commenting on whether Sanders has support from people of color. He said that “racist white liberals seem to love them some Bernie Sanders” and then dismissively referred to Sanders’ African-American female staffers: “I don’t care how many people from the island of misfit Black girls that you throw out there to defend you on a regular basis.”

“That’s where you have crossed the line, sir,” host Karen Hunter said, to which Johnson replied, “I don’t care.”

During the New Hampshire primary, a woman told MSNBC that while she was a fan of the network, she was so fed up with their coverage of Sanders that she was going to vote for him for that reason alone.

I love this woman. Said she was so fed up by MSNBC’s “Stop Bernie” campaign, she decided to vote for him. Glad some people see right through the Corporate media bias! #NHForBernie #NH4Bernie pic.twitter.com/fyPsv28K61

Hayley Miller contributed to this report.

CORRECTION: An earlier version of this story mentioned a quote from Matthews referencing Gen. [Louis] Renault. However, Louis Renault was not a general and it isn’t clear which general Matthews was referring to.