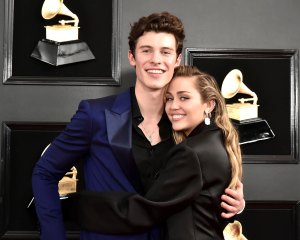 She’s just being Miley! Shawn Mendes broke the internet over the weekend when he posted shirtless pictures from his new Calvin Klein campaign on Instagram. Celebrities including Jennifer Lopez, Julia Michaels, Alex Rodriguez and Charlie Puth praised the photos shortly after they were uploaded on Saturday, February 16, but Miley Cyrus waited a few days to react.

The 26-year-old “Nothing Breaks Like a Heart” singer took to Twitter on Monday, February 18, and trolled the “In My Blood” crooner, 20, over his sexy ad. Cyrus uploaded a side-by-side comparison of herself and the Canadian star posing topless in their Calvin Klein underwear and hilariously wrote, “Don’t leave your children with Miley.”

The message was a play on a tweet posted by Lady Gaga in September 2013. “DO NOT LEAVE YOUR CHILDREN WITH LADY GAGA,” the Oscar nominee wrote alongside a snapshot of herself and Cyrus.

The Hannah Montana alum and former Vine star joined forces to perform an incredible rendition of his song “In My Blood” at the 61st annual Grammy Awards on February 10. The following day, Mendes expressed his excitement by writing two words on Twitter: “Miley Cyrus !!!!!!!!!”

On February 8, two days prior to the awards show, the duo teamed up to sing Dolly Parton’s 1989 duet, “Islands in the Stream,” which originally featured Kenny Rogers, at the MusiCares gala honoring the country music legend in Los Angeles.

The “Wrecking Ball” songstress teased the collaboration by posting a photo of the pair via Instagram shortly before they hit the stage and captioning it with the tune’s lyrics: “We rely on each other uh-huh @shawnmendes.” 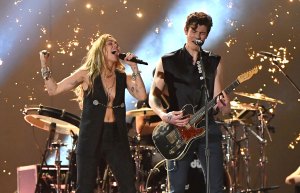 Cyrus later told Variety that she and the “Nervous” crooner connected because she “actually sent him a DM” to discuss a collaboration. She noted: “I love the way that he always kind of plays alternative pop, because it’s something that I love to do.”