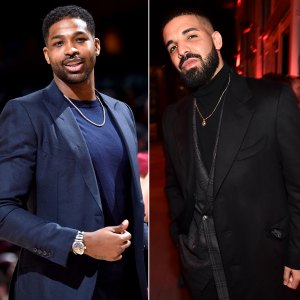 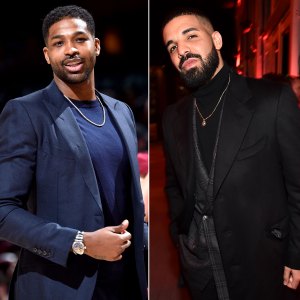 Boys only! Tristan Thompson enjoyed a “fun guys’ night out” with Drake and other pals at SHOREbar in Santa Monica on Sunday, February 17, amid speculation he and Khloé Kardashian have split, an insider tells Us Weekly.

“Drake and Tristan had a great time with their friends and enjoyed the music and socialized with everyone,” the source says. “They gave a big shout-out and toasted to their friend’s birthday.”

As for if there were any ladies around the group, the insider notes that “there wasn’t any flirting with girls going on and they kept to themselves,” adding, “they were at their own table and tucked in the corner next to the DJ booth against the back wall by the entrance door and it was all guys at the table.”

This isn’t the first time the Cleveland Cavaliers player, 27, has been spotted out in the Los Angeles area in recent days. Thompson was “being flirty, hitting up girls,” at the Pineapple Hill Saloon & Grill in Sherman Oaks, California, on Valentine’s Day, a source told Life & Style. 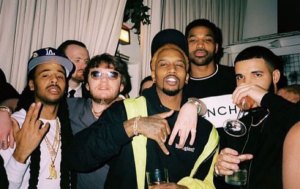 Later that night, the athlete dined with pals at Gyu-Kaku restaurant in Sherman Oaks. “He was with two other male friends,” a source told Us at the time. “He seemed very calm and reserved. All of them did.”

Meanwhile, distance between the Good American founder and Thompson — who share 10-month-old daughter, True — has grown in recent weeks, sparking speculation they have called it quits on their relationship.

Earlier this month, a source told Us that Kardashian, who gave birth to her first child with Thompson days after he was caught cheating on her with multiple women, is “living and behaving as a single mother.”

Another source told Us in January: “Regaining Khloé’s trust is going to take time. Tristan is a great father, but it’s not yet clear if they can fully rebuild what they had. The extent of what Tristan did is still setting in. She hasn’t gotten over it yet.”

Thompson’s outing with Drake, 32, also comes on the heels of an ongoing feud between the Degrassi alum and Kardashian’s brother-in-law, Kanye West, that began in 2018 after a collaboration had been shelved.

More recently, the Yeezy founder, 41, went off in a series of since-deleted Tweets, requesting a public apology from Drake for following Kim Kardashian on Instagram.