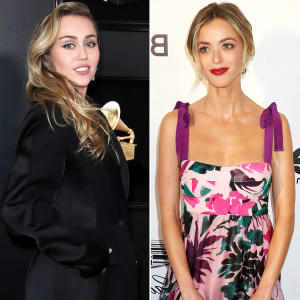 Onward and upward! Miley Cyrus and Kaitlynn Carter are getting over their respective splits from Liam Hemsworth and Brody Jenner together.

“Kaitlynn and Miley are so into each other and attracted to each other,” a source tells Us Weekly exclusively. “They’re having a lot of fun together and love spending time together.”

Photos of the “Mother’s Daughter” singer, 26, and the lifestyle blogger, 30, kissing on vacation in Italy surfaced on August 10, just minutes after news broke about Cyrus’ separation from Hemsworth, 29. Since then, the women have been spotted together on numerous occasions, most recently while having lunch with the Hannah Montana alum’s mother, Tish Cyrus, in Los Angeles on Saturday, August 17.

Miley even got a forearm tattoo of the Visconti of Milan coat of arms, inspired by her and Carter’s Italy trip.

“[Kaitlynn] and Miley became close within the past few weeks because they connected over their breakups and leaned on each other,” a source told Us exclusively earlier this month.

The Grammy nominee and the Hunger Games star were married for nearly eight months before calling it quits. He officially filed for divorce on Wednesday, August 21, citing “irreconcilable differences.”

“I wish her nothing but health and happiness going forward,” Hemsworth previously wrote on Instagram. “This is a private matter. … Peace and Love.”

Meanwhile, Carter and Jenner, 36, announced their breakup on August 2. They had tied the knot in Indonesia in June 2018, but the union was never legal as they did not obtain a marriage license in the U.S.

Cyrus and Carter seem to be on good terms with Jenner, though. To celebrate his 36th birthday on Wednesday, the rumored couple sent a weed bouquet to the Hills: New Beginnings star.