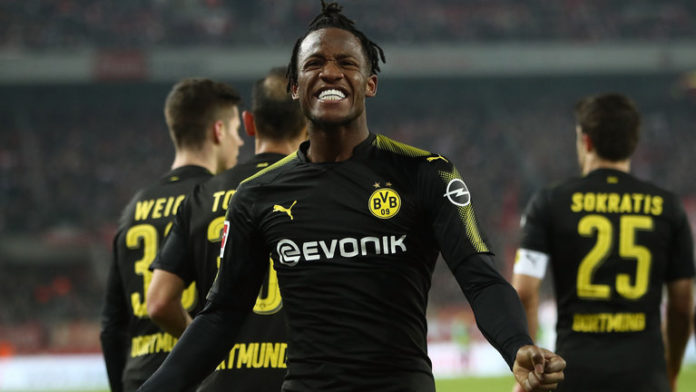 Michy Batshuayi scored twice on his debut as Borussia Dortmund earned a much-needed win, seeing off basement side Cologne 3-2 in a thriller.

That Cologne were able to cause Dortmund so many problems says much about their on-going defensive worries, but Batshuayi was able to hit the ground running after arriving on loan from Chelsea as a replacement for Pierre-Emerick Aubameyang.

Batshuayi’s goals were cancelled out by Simon Zoller and Jorge Mere respectively, but another ex-Chelsea man, Andre Schurrle, bagged the winner six minutes from time.

Dortmund poured forward in the early going, led by the impressive Schurrle who had the first decent shot of goal when he cut in from the left and sent a right-footed drive narrowly wide.

But Cologne sensed a nervousness in the visiting defence whenever they were able to break, and Milos Jojic missed a glorious chance to open the scoring in the 13th minute when Sehrou Guirassy’s cutback deflected to him on the penalty spot, but he shot straight at Roman Burki.

Dortmund were straight down the other end, where Mahmoud Dahoud went down in the area and, as some visiting players screamed for a penalty, Shinji Kagawa sent a rising shot on to the top of the crossbar.

With 20 minutes gone Batshuayi was still looking to make an impact but saw his first real effort – from Schurrle’s cross – blocked.

His debut goal would arrive 14 minutes later when Jeremy Toljan got to the byline and pulled the ball back for a simple finish.

He thought he had another just before half-time, flicking home Toljan’s drilled effort, but the VAR intervened to correct call him offside.

Cologne pulled level on the hour mark as Christian Pulisic lost possession and Dominique Heintz powered forward to shoot. Burki kept it out but got a poor touch, pushing the ball out for Simon Zoller to head home.

Batshuayi replied almost immediately with Pulisic returning the favour on Heintz, dispossessing him and stabbing the ball through for the striker to poke it between Timo Horn’s legs.

Though they had the lead back, Dortmund still looked shaky at the back, with Zoller having a free shot at goal from a throw-in before Burki flapped at a corner which the defence cleared.

Dortmund could not take the warning and Cologne levelled moments later as nobody tracked Jorge Mere from a corner and he flicked the ball home.

But the game would finally swing Dortmund’s way as Schurrle got the goal his performance deserved.

Batshuayi turned provider, playing the ball into the winger’s path and he bore down on goal before lashing home a powerful shot which took a slight deflection to rise over the goalkeeper and into the far corner.

There was a chance of a late leveller for the hosts but Sokratis Papastathopoulos made a superb block to keep out Marco Hoger’s powerful shot.