Meghan’s honest remark about marriage is a bit sad 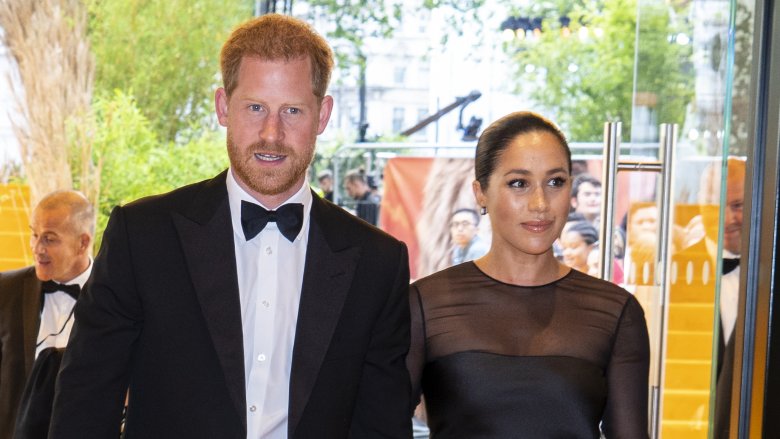 Marrying into the royal family can’t be easy — even for a famous former actress like Meghan Markle.

While attending the London premiere of Jon Favreau’s live-action remake of The Lion King on Sunday, July 14, 2019, the Duchess of Sussex shed some surprising light on her marriage with Prince Harry, hinting that the ongoing media attention surrounding their nuptials hasn’t exactly made for a “Hakuna Matata” romance.

In a clip captured by The Sun, Markle and the ginger prince were shown meeting musician Pharrell Williams. “I’m so happy for your union,” the “Happy” hitmaker told the royal couple. “Love is amazing. Love is beautiful. Don’t ever take that for granted. But what it means in today’s climate, I just wanted to tell you it’s so significant for so many of us. Seriously.”

Calling the duo’s groundbreaking interracial royal marriage “beautiful,” Williams added, “We cheer you guys on.” We couldn’t have said it better ourselves. “Oh, thank you,” Markle replied as Prince Harry graciously nodded at the touching comment. However, she went on quip to Williams, “They don’t make it easy.”

Amid the ongoing reports surrounding the Sussexes’ alleged feud with Prince William and Duchess Kate Middleton, the continuous public comments from Markle’s own estranged family, and much more tabloid-esque trolling over the last year and a bit, the new mom was most recently targeted in both the press and on social media for supposedly holding two-month-old son Archie wrong during an adorable royal family playdate at the King Power Royal Charity Polo Day earlier this month.

Basically, it unfortunately doesn’t take much to figure out what the duchess may have been hinting at with her honest remark. All that said, Markle, 37, and Prince Harry, 34, thankfully appear to be as happy as can be after welcoming their first child. As Nicki Swift previously reported, Markle gave birth to their baby boy, whose full moniker is Archie Harrison Mountbatten-Windsor, on May 6, 2019. Further breaking new ground, The New York Times notes that Baby Sussex is the very first multiracial, British-American prince born into the British royal family.

In some related happy news, Meghan Markle and Prince Harry also rubbed shoulders with America’s own king and queen of hip hop, Jay-Z and Beyoncé, at the European premiere of The Lion King. The latter, of course, currently stars as Nala in the classic Disney tale’s reboot.

The meeting between these two beloved couples was pretty much everything you’d want it to be. According to Harper’s Bazaar, 37-year-old Beyoncé appeared to call Markle “my princess” as the two hugged one another. Reportedly calling little Archie “so beautiful,” the former Destiny’s Child star allegedly went on to say, “We love you guys.” As proud parents of three little ones themselves — including 7-year-old daughter Blue Ivy and two-year-old twins Rumi and Sir — the Carters were happy to share some wise words with Markle and her royal hubby. “The best advice I can give you,” Jay-Z reportedly told the new parents (via the Daily Mail), “always find some time for yourself.”

The mutual love between this fabulous foursome, who were all smiles throughout this sweet greeting, came at no real surprise. Fans of Queen Bey and the British royals alike may remember that the “Crazy In Love” songstress previously paid tribute to Markle and the ginger prince on her website this past February. In a post honoring Black History Month and highlighting some inspiring contributions from the world’s so-called “Melanated Monas,” Beyoncé noted that Markle “[became] one of the few Black women to join a royal family” after she and the prince tied the knot in an unforgettable ceremony held at St. George’s Chapel at Windsor Castle in May 2018.

“Meghan brought many Black traditions to her Royal Wedding including a Chicago-based Black pastor, an amazing gospel choir, and a young Black cellist,” Beyoncé continued to write in part at the time. “At the wedding her culture was front and center, and she and Prince Harry have continued to push the race relations dialogue forward both near and far.”

Sure, royal fans, insiders, and experts alike may not be feeling the love tonight — or very much at all — when it comes to Meghan Markle and Prince Harry, but superstar musicians like Pharrell Williams and Beyoncé certainly are … and that’s an undeniable win in our book.

Meghan's honest remark about marriage is a bit sadMarrying into the royal family can't be easy — even for a famous former actress like Meghan Markle. While attending the London premiere of Jon Favreau's live-action remake of The Lion King on Sunday, July 14, 2019, the Duchess of Sussex shed some surprising light on her marriage...