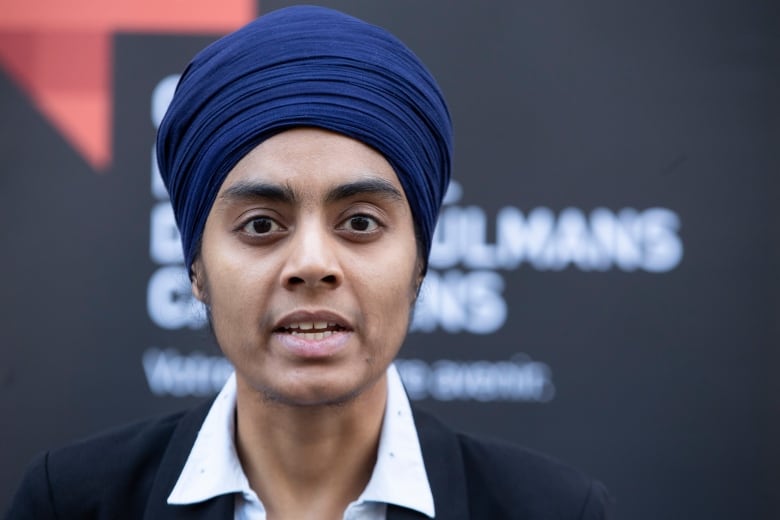 Opponents of the province’s religious symbols law held a news conference on the steps of the Quebec Court of Appeal on Tuesday morning in Montreal. (Ivanoh Demers/Radio-Canada)

The National Council of Canadian Muslims (NCCM) and the Canadian Civil Liberties Association filed the leave to appeal at Quebec’s Court of Appeal on Monday.

“This bill must be stopped now. That is because Bill 21 at its core is about separating us from each other,” said Mustafa Farooq, NCCM’s executive director, on the steps of the Appeal Court on Tuesday.

The law, formerly known as Bill 21, was passed by the Coalition Avenir Québec government last month and seeks to affirm laicity, or secularism, within the province’s civil service.

It bans public teachers, police officers, government lawyers and other authority figures from wearing religious symbols at work. It also requires public services to be given without face coverings such as the niqab.

Within hours of the law coming into effect, the two groups filed a motion challenging its constitutionality, saying parts of it force people to give up their identities.

That motion included a request for an injunction, a legal measure that would have frozen parts of the law while waiting for the courts to weigh in on the bigger constitutional question.

However on July 18, Justice Michel Yergeau ruled court must defer, at this stage, to the power of elected politicians to pass legislation they believe is in the public good.

“We disagree that the harm to folks of Quebec is hypothetical. Rather, it is actual, inevitable and irreparable. We believe that there is urgency in halting this law,” said Farooq.

Other groups may join the fight

B’nai Brith Canada, a Jewish group, and the World Sikh Organization are considering joining the appeal.

“Our position on Bill 21 is quite simple: It is a reprehensible piece of legislation,” said Steven Slimovitch, criminal law adviser for B’nai Brith.

“The state should never be involved in legislating religion in one form or the other.”

Calling it a solution to a problem that doesn’t exist, Slimovitch said, “We cannot tell a certain segment of society that they cannot participate because they are different.”

He called on Prime Minister Justin Trudeau to “clearly express his dissatisfaction” with the law.

The law promotes the idea of having second-class citizens, said Amrit Kaur, vice-president of the World Sikh Organization of Quebec and Atlantic Canada. 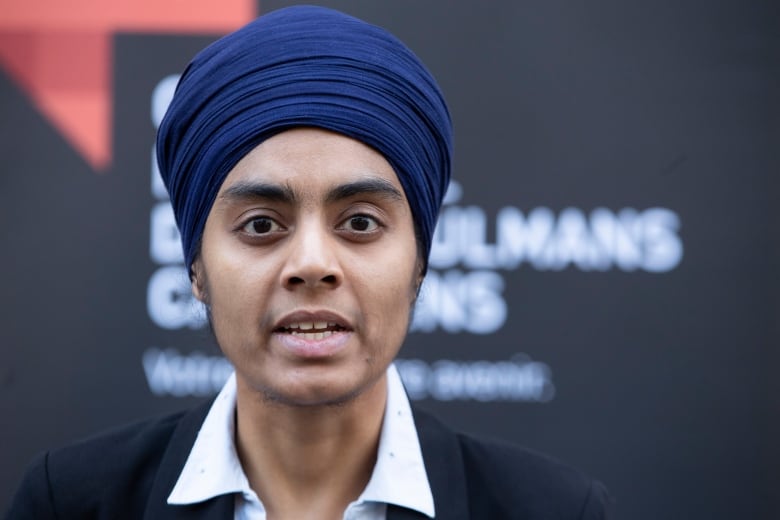 Amrit Kaur, vice president of World Sikh Organization of Quebec, says the province’s religious symbols ban on public teachers has forced her to look for work in other provinces. (Ivanoh Demers/Radio-Canada)

Kaur said she is being forced to leave the province because of the law. The recent graduate is looking for work as a teacher in British Columbia.

“To say that there are no immediate effects is a complete lie, because there are people like myself who have to choose between their faith and their careers, and they cannot put their faith aside, so they have to leave their homes.”

Kaur said the religious symbols ban goes against the Quebec Human Rights Code and there is no evidence that proves wearing such symbols proselytize fellow employees or students.